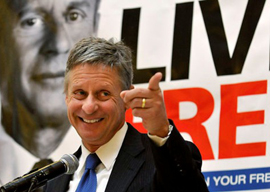 President Obama has been a failure. On his watch, the American economy has significantly deteriorated largely because he has stifled free market forces by over-regulating them and because he has laden taxpayers with debt. Those two factors alone—the federal government increasing the cost of doing business by telling businesses from physicians to major industries how to do their work, and the federal government spending trillions it doesn’t have and pushing the debts onto future generations—are enough to sink any economy.

In this arena, Mitt Romney has it half-right. He does understand that only free market forces can produce prosperity, but he fails to see that when the government spends what it doesn’t have, the result is inflation and higher taxes for future generations. Why does the federal government now spend half a trillion a year in debt service? Because every president, Republicans as well as Democrats, from FDR to Obama has borrowed money in order to spend more than he collected and has let future generations deal with repaying the debt. Because the feds do not repay (they merely roll over) their debt, the cost of interest payments has skyrocketed. Romney’s ability to articulate the virtues of the free market and to dance around the issue of debt, while the president nearly fell asleep, are the reasons he did so well in the presidential debate last week.

“Don’t hold your breath. The debates are crafted by the folks who run the Romney and Obama campaigns.”

In the realm of foreign affairs, the president has unleashed a torrent of violence in the Middle East by supporting some of the people his predecessor was fighting a few years ago. Those folks now run the government in Libya and Egypt, and those places are now unsafe for Americans. What would Romney do? He’d insert the U.S. military to extend American dominance and build a new world order. What has Obama done? He’s bombed and killed innocents with drones. Neither has learned the lessons of 9/11: You cannot kill people or occupy foreign lands without moral and legal justification, lest you suffer deadly consequences.

Because Romney and Obama are different only in degree, I wish the cabal of former leaders of the two major political parties that runs the debates would permit former New Mexico Gov. Gary Johnson to participate. He is the Libertarian Party candidate who is on the ballot in all 50 states and the only current national candidate who if elected would shrink the government and keep it within the confines of the Constitution.