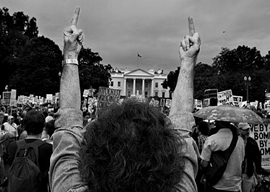 Spare a kind thought for my old friend Michael Morrell’s oldest son, Geoff, the Pentagon’s Press Secretary. The Defense Department has tasked poor Geoff with providing its public reaction to Julian Assange’s Wikileaks disclosure on Saturday of 391,832 documents relating to America’s war in Iraq. The new flood of “Pentagon Papers”-style documents detail a pattern of US soldiers murdering civilians at American checkpoints, of American-created Iraqi security forces torturing and raping, of a shadow war in Iraq between the US and Iran, and of official concealment of civilian death figures. Geoff’s is no easy job, especially when the Washington administration pretends the war is “officially” over and the troops who are still there have “officially” departed.

“The only responsible course of action for Wikileaks at this point is to return the stolen material and expunge it from their Web sites as soon as possible,” Geoff stated on Friday, knowing the documents were to be released at a Wikileaks press conference in London on Saturday with simultaneous publication in The New York Times, Britain’s Guardian, Der Spiegel, and Al Jazeera TV.

How do you restore a girl’s virginity after she’s given it away? (Someone within the defense establishment, after all, gave Wikileaks the documents.) The fact is, you can”t, and I suspect Geoff knows it. The documents are in the public domain. However, we could all help him out by delivering our copies of The New York Times, Guardian, and Der Spiegel to the Pentagon’s front gate. I don”t know how we”ll send them the TV broadcasts and the pages floating in cyberspace, but we can try. In fact, it is our patriotic duty. The people who made this war and who prolong it need secrecy. It is therefore every patriot’s job to send the stuff back and pretend we don”t know that at least 66,081 civilians, by US count, were killed in Iraq between 2004 and 2009 and that Americans permit the Iraqi security forces (created and still advised by the US) to torture thousands of their citizens.

“Someone long ago established as reality the fiction that to oppose going to war was unpatriotic.”

A coincidence prevails over Julian Assange’s timing his news conference at the four-star Park Plaza Riverbank Hotel just down the street from the British Secret Intelligence Services” headquarters. On the Friday before Assange met the press, the British government released the autopsy report into government weapons expert Dr. David Kelly’s 2003 death. Under British law, the coroner’s conclusions should have remained unavailable to the public for seventy years. However, in what was clearly a bid to quash conspiracy theories that maintain British intelligence agents murdered Dr. Kelly for telling the BBC the truth about Iraqi nuclear and chemical capabilities, the autopsy confirms that Dr. Kelly slit his own wrist and bled to death. The report does not mention that Tony Blair’s manhunt for the source of information contradicting his official lies precipitated Kelly’s suicide. After Kelly died, a government inquiry forced one BBC journalist and the BBC’s Director-General to resign. This was despite the facts that the BBC told the truth, that Kelly’s information was proven correct after an invasion that left more than 100,000 people dead, and that Dr. Kelly was a sheep among wolves. If Wikileaks had existed in 2003 and Kelly had passed along his documents to it in electronic form, he might be alive today.