Let the Bastards Be Scared 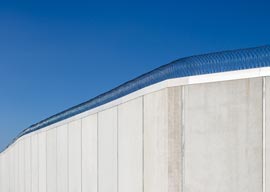 In the early 1970s, Paramount decided to make a feature film based on the Star Trek TV series. An early story idea was presented by the legendarily irascible writer Harlan Ellison. Like all sci-fi, Ellison’s concept was dense and convoluted, so I”ll give you the broad strokes: A powerful alien race is destroying all humans in its bid to become the dominant life-form on Earth. Kirk and the Enterprise crew go back in time to destroy the unstoppable alien race when it was in its early stages of development, and therefore vulnerable. The heroes find themselves confronted by a moral and ethical dilemma: To save their own world, they must act aggressively against a young alien race, based on the knowledge of what will happen if the aliens are allowed to grow and flourish.

Paramount passed, Ellison left the project, and even James Cameron never stole the idea. He should have. The moral dilemma that Kirk and crew encountered resonates today as the nations of the West struggle with an influx of refugees from the Muslim world. Yes, leftist hecklers, I know”not all of the refugees are terrorists or even terrorism supporters. But what they are now is only half the story; more troubling is what they might become as they grow in numbers and confidence. Decent people often find it difficult to take harsh measures in the present in order to secure a better future. We are not the “precogs” of Minority Report any more than we are God viewing Esau in the womb. We like to think that the future is ours to make, that nothing is predetermined, and that with enough love and compassion, any crisis can be averted.

As last week’s Muslim-perpetrated atrocity in Paris tragically demonstrated, love may not be the answer. And while I am in no way suggesting that we face a Captain Kirk-level dilemma (kill or be killed), some measure of “meanness,” a modicum or two of “not love,” might be required on the part of the West, because you don”t have to be psychic to see where this is heading. According to the Pew polling organization, 35% of French Muslims support, to one degree or another, “suicide bombing of civilian targets to defend Islam.” Among French Muslims ages 18″29, that figure climbs to 42%. Leftists like to claim that not all Muslims are “radicalized,” while ignoring how apparently easy it is for a Muslim to become radicalized. The catalyst can be anything from a news report about a faraway war to a simple cartoon. When apologists deny the problem of Muslim radicalization on the grounds that “it’s not all of them,” that’s like a doctor declaring that pneumonia isn”t a problem among the elderly because not all of them have it. Of course not all elderly people have pneumonia, but there’s an increased susceptibility, and that’s what matters.

But still the West piles on the love. As a Pew poll released after the Charlie Hebdo massacre showed, French attitudes toward Muslims became more positive after the attack. Indeed, last year French officials formally changed the way they refer to the Islamic State terror group, switching from “ISIS” to “Daesh“ so as not to offend Muslims.

So much love. And look where it’s gotten France.

Of course, the left has responded predictably to the newest bloodshed: We need more love! Muslims fear a backlash! We must end Islamophobia! Again and again, the focus is on non-Muslims. “The kitty cat didn”t mean to scratch you, but you pulled his tail. He only acted out because he’s afraid!” To the left, Muslims are the kittens and we”re the rotten little kids, and if we”d just stop scaring them, they”d curl up in our laps and purr away.

Well, here’s a novel thought: Maybe the fear isn”t such a bad thing. The more the West has mollycoddled its Muslim population, the worse things have gotten. It’s simple human nature”people are at their best when they”re humbled, and their worst when they”re empowered. Remember how John Ashcroft had U.S. Muslims too terrified to piss after 9/11? If fear and “Islamophobia” cause Muslim terrorism, Ashcroft’s tenure should have been marked by a plague of post-9/11 attacks on U.S. soil. But no. It’s almost as if U.S. Muslims behaved better knowing they were under a microscope.