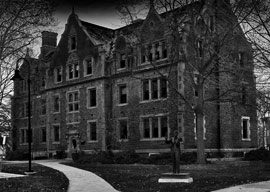 At a symposium in May, Harvard Business School professor Clayton Christensen predicted that “50 percent of the 4,000 colleges and universities in the U.S. will be bankrupt in 10 to 15 years.”

Christensen appears to be onto something. The number of students enrolled in American colleges and universities has dropped every year for the past five years. In 2016, the majority of private and public American colleges failed to meet their enrollment and tuition targets.

This is possibly the best news I’ve heard all year. And not because I’m against learning or education—it’s because American colleges no longer teach people how to think; they command people what to think, with the constant looming Sword of Damocles hanging over the head of anyone foolish enough to express a dissident thought.

American colleges are no longer institutions of higher learning. It would be more apt to refer to them as state-sanctioned seminaries for the secular religion of Cultural Marxism. Instead of strolling out of college with nimbler minds, students now stumble out into the real world with their brains scrubbed clean of the ability to hatch a single independent thought.

And as they enter a hostile job market with their useless Master’s Degrees in Postmodern Gender Modalities Among Hamsters, your average hapless college grad is saddled with a life-crippling average debt of nearly $40K to banksters who finance all this brainwashing. Student debt in America is currently close to $1.5 trillion—nearly twice as much as all credit-card debt combined.

“The only intelligent thing to do with modern American colleges is to get rid of them.”

If you’re a white male who isn’t bothered about being a white male, the current college climate is intensely hostile. Women currently account for 56% of all enrollments nationwide, and that quotient is expected to rise. As a recent article in The Atlantic put it, “at most college campuses the attitude is that men are the problem.”

The larger problem is that modern higher education is so marinated in leftist propaganda, what passes for “education” is often mistaken for reality. A study from last year found that at Ivy League schools such as Columbia and Princeton, liberal professors outnumbered conservatives by a factor of 30 to 1. According to psychology professor Jonathan Haidt, social justice is now the new religious fundamentalism, and if one dare question the sanctity of the modern sacred cows, one risks ostracism at the very least…or possibly expulsion…or even, as has been amply demonstrated over the past year when anyone to the right of Trotsky attempts to speak on an American campus, you are likely to be shouted down or physically attacked.

Rather than being instructed in crucial matters—such as how to detect logical fallacies and distinguish between what’s objective and subjective—modern students indenture themselves to the loan-peddlers for the dubious honor of taking inane courses such as “Kanye Versus Everbody! [sic],” “Sci-Fi Queered,” “What If Harry Potter Is Real?,” and “How to Watch Television.”

While piously posing as staunchly anti-racist—whatever the hell that means, because it can’t be quantified—students are instead encouraged to channel all of their latent racial hatred toward the very idea of white people.

This is why a Hispanic college professor received no reprimands for expressing this gleefully genocidal sentiment:

We have an aging white America. They are not making babies. They are dying. It’s a matter of time. [laughter] The explosion is in our population.

Neither was an Indian female professor at the University of Michigan given even a mild slap on the wrist for writing an essay about “White Moral Blindness.”

It’s why no faculty members were disciplined in 2015 when a white student at the University of Massachusetts-Amherst was denied entry from a “Stop White People” luncheon on campus.

It’s why a black sociology professor at Trinity College was not fired for writing on Facebook that it’s time to “confront” white people:

I’m fed up with self-identified ‘white’s’ daily violence directed at immigrants, Muslims, and sexually and racially opressed [sic] people. The time is now to confront these inhuman assholes and end this now.

It’s why a black female sociologist became a professor at Boston University after tagging white college males as “a problem population”:

white masculinity is THE problem for america’s colleges.

why is white america so reluctant to identify white college males as a problem population?

It’s why female professors are freely allowed to suck off tax dollars for writing pinnacles of inanity such as “The Perilous Whiteness of Pumpkins.”

It’s why universities across the country stop operating for a day…or a week…or sometimes permanently when their mentally deficient and thoroughly brainwashed students hallucinate Klansmen on campus or make false claims about swastikas drawn in human feces.