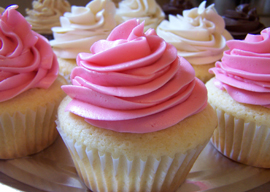 Last Saturday, my 80-year-old dad and his lady friend came to my house in Wellesley for lunch. I roasted haunch of venison shot with bow and arrow and served it with butternut-squash lasagna made with winter vegetables from our garden. My dad looked at me and said, “I saw on the news about a woman who runs a cupcake store. The kids come and decorate the cupcakes themselves. She can’t make them fast enough. It’s wonderful!” Glowing with pleasure, he took another bite of my pear-and-apple pie and asked, “Why don’t you open a cupcake store?”

Uh, because I am wearing sweats and not a girly dress? Why would my Korean dad think that I long to make cupcakes for a living? Probably for the same reason that he thinks buying “gold, physical gold” is a safe investment: He’s been watching too much television. On cable and network channels, it seems that every other female character dreams of making cupcakes her business. The Food Network is now in the third season of its show Cupcake Wars, and it’s become the driving engine for 2 Broke Girls, a new sitcom about a pair of diner waitresses whose goal is to save enough money to open a cupcake shop. Never mind that the broke girls are too busy having misadventures to perfect their baking skills. If the people lack for bread, let them eat cupcakes! Plucky in their poverty, the two girls are the mystical mates of Doofus Dad and Viagra Man, white men who stumble around proudly unable to get the job done even as they inhabit strangely privileged worlds. The meta-narrative is clear: Cupcakes may be fluffy, but they will pay the bills, unlike those silly stockbrokers who lost all of your money but magically kept all of theirs.

In the real world, emasculation is a downer and cupcake boutiques fail. Sure, Sweet Cupcakes has four swank shops in the Boston area, and Kickass Cupcakes has two locations and a hipster food truck that mostly lives in front of the Harvard University Science Center. I’m not a fan of sweets in general but I love the idea of a “kickass” pastry that flaunts the frill in your face. Take that, fairy cake! (“Fairy cakes” are what the British call cupcakes.) The truck crew will also make a special-order gluten-free organic free-range cupcake for Cambridge people like my sister.

Those are the success stories. The list of cupcake bakeries that have closed is far longer. In a lousy economy, the dismal statistics are entirely beside the point. Cupcakes evoke nostalgia for stay-at-home-moms making sugar bombs lobbed with love, except my Korean mom never made them, and probably yours didn’t, either…except, maybe, once for the school bake sale using cake mix and icing from a can, and the end result looked like mutant muffins after the Labrador licked off all the jimmies.

So what is the meaning of this national cupcake obsession? There is even an origin story for the American cupcake craze: Point Zero is Sprinkles of Beverly Hills, California, where pedigreed French cupcakes glisten with good taste and even better fortunes. Pastry chefs like to yabble on about the petite proportions allowing them greater creativity in the kitchen; teenage girls think they’re cute and swirly, like sleeping kitties made of frosting. Admittedly, this is an unscientific observation based on my household’s giggling girls. One was just assigned an obscure short story about cupcakes in her Honors English class. She refused to give me details on the grounds that the story was about “Little Debbie-type cakes and not cupcakes.” Apparently plastic wrappers and preservatives are too down-market to fit the cupcake image.