Let Them Eat Paint: It’s Time for a Separation of Art and State 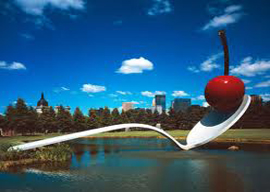 Philadelphia’s City Hall is a towering masonry masterpiece, an ornate and stately 548-foot-tall architectural wedding cake in a town not known for its beauty. However, as anyone who’s exited up the subway stairs at 15th and Market Street since 1975 knows, one’s initial view of City Hall is obscured by a publicly funded, staggeringly ugly, and existentially inexcusable 45-foot-tall stainless-steel clothespin.

Mayor Frank Rizzo, in office when Claes Oldenburg’s infamous “Clothespin” was installed, berated the giant pop-art tumor as an insult to Philly’s blue-collar base. In turn, Oldenburg reputedly insulted Philly as a bastion of blue-collar retards unable to grasp whatever message lurked behind his ten-ton clothespin.

In downtown Portland, OR, stands a nightmarish, intensely uncomely, and publicly bankrolled “interactive” sculpture known simply and lazily as “Pod.” As far as I can tell, playing with Pod is supposed to recreate the deeply buried collective genetic memory of manually swinging around a dinosaur’s testicles as it passed overhead our ancestors, deconstructed and recontextualized into the public space and aesthetic sandbox of a disproportionately pretentious Caucasian populace in the Pacific Northwest.

Then again, I”ve never referred to myself as an “artist,” so I wouldn”t really know.

At some mistily distant, foggy, now-forgotten point in history, publicly funded art at least pretended to commemorate or celebrate the collective experience or achievement of those who were funding it. These days, it seems to exist only to insult the public for being too stupid to comprehend its conceptual complexity.

I won”t argue that the public isn”t generally stupid, but I hope they aren”t so thick-skulled that they continue to tolerate being financially milked in order to fund 45-foot clothespins and interactive dinosaur-testicle installations constructed by pampered art-school brats who feel no shame biting the rubes who feed them.

If you”ve ever been to a major city, the odds are nearly 100% that you”ve seen a publicly funded sculptural monstrosity that is fairly breathtaking in its idiocy:

“¢ San Jose taxpayers doled out $500K for a sculptural tribute to Mexican snake god Quetzalcoatl that some insensitive souls have suggested resembles a spiraling pile of feces.

“¢ In Wilmington, NC, stand a half-circle of sixteen-foot tall, um, bowling pins, or paddles, or something intended to commemorate and, I guess, somehow atone for the city’s 1898 race riot. Although it’s presumed that no one who was alive during the riot is alive now, this memorial cost living North Carolinians a half-million dollars.

“¢ Outside the LAPD’s new headquarters sit a half-dozen brownish lumps of something or other designed by artist Peter Shelton at a cost of around $500,000 to the public. When Police Chief William J. Bratton said the installation reminded him of “cow splat,” Shelton chided him for his inability to grasp modern art.

“¢ A disconcertingly demonic 32-foot “Blue Mustang” at Denver International Airport is reputedly freaking out more than a few passengers and cost taxpayers an estimated $600,000.

In rosier times, such extravagant lapses of taste may seem forgivable. What’s harder to excuse is that fact that while the current economic disaster is forcing American government agencies to downsize, essential public jobs are being slashed while ill-advised public-arts projects continue to get funding:

“¢ While laying off teachers, Charlotte, NC, is planning to spend $42,500 on an art project that will add “mosaics” to public trash receptacles.

“¢ Due to budget deficits, Ann Arbor, MI, is laying off firefighters, yet they still were able to scratch up $850K for a public fountain by a German conceptual artist.

“¢ In 2008, while slashing funding for teachers, NYC found an extra $15.5 million for an insipid series of temporary manmade “waterfalls” in New York Harbor by artist Olafur Eliasson.

Public art is, by definition, art that no one wanted to pay for privately.

The primary people who benefit from these public-arts projects are, obviously, the artists rather than the public. They are the type of people who will tell you that their art is “informed by” complex intellectual trends regarding how the individual uses public space to evaluate their relationship with the ways in which we perceive nature vis-Ã -vis manmade environments and how architecture intersects with new contexts and forms of personal and social meaning.