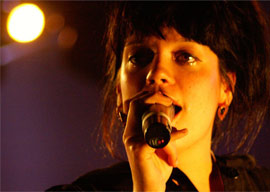 We’re perched at a precarious point in history where it seems impossible to become a celebrity anywhere in the West if you don’t make a grand public display of denouncing all things Western.

Case in point: British pop singer Lily Allen, a multiplatinum artist who at age 32 has an estimated net worth of $20 million via sales of songs such as the pro-gay anthem “Fuck You.” In 2016 she made headlines after visiting a migrant camp in Calais and apologizing to the refugees on behalf of her country, even though, if you were to peek at a map, you would realize that Calais is in France and her country is England.

You can bet your sweet bippy that if Allen sang anti-gay anthems and expressed the merest concern over England’s Islamification, she’d be waiting tables somewhere in a kebab shop rather than living in mansions, walking on red carpets, and drinking champagne out of slippers.

“The powers that be are systematically violating the Western mind. It’s a deliberate act of cultural rape.”

Last week in the midst of a Twitter argument about Muslim rape gangs in England—specifically the charge made in 2015 by Rotherham’s Labour MP Sarah Champion that grooming gangs may have abused up to a million British children—an anonymous tweeter who calls himself Tolerant Man asked Allen whether this would have happened if England didn’t have such an open-door policy toward Muslim immigrants:

Allen’s response was to invoke the nirvana fallacy and speculate that if there weren’t Muslim immigrants to pick up the slack, evil indigenous white British males would have done the raping anyway:

Actually, there’s a strong possibility they would have been raped or abused by somebody else at some point. That’s kind of the issue.

She even doubled down and insisted that all of the truly nasty raping in Britain was being done by white males:

The Type 2 Rapists of which 100% are British white males. The men that have sex with their stepdaughters twice a week for years at a time. The, neighbors, uncles, gardeners, priests, fast food restaurant managers that do it over and over again.

In case you were unaware of the distinction between Type 1 and Type 2 rapists, here’s a quick breakdown:

Allen is therefore alleging that all of England’s grooming gangs could be classified as Type 1 rapists. Last year a British think tank called Quilliam released a report claiming that of 264 criminal convictions in England of grooming gang members since 2005, 222 of those convicted—a resounding 84%—were of Asian origin.

(In England, “Asian” doesn’t carry the same connotation as it does in America. What Americans call “Asians” are referred to as “Orientals” in England. To Britons, even Turks are “Asians,” and on this point they’re technically correct—nearly all of Turkey is in Asia, as is all of Pakistan. In current British parlance, “Asian” is a very polite way of saying “Muslim.”)

Modern England is 85.4% white and only 7.8% Asian. When it comes to organized gang rape, Asians (i.e., Muslims) are overrepresented by 1076%. But Allen would have us believe that the grooming gangs in Rotherham, Rochdale, Derby, Oxford, Bristol, Telford, Banbury, Aylesbury, and Keighley are comprised entirely of Type 1 rapists, who butcher and rape and threaten to immolate their victims because they view it all as part of a “mutually satisfying romantic relationship” rather than as part of a grander scheme of cultural conquest.

The Mirror took Allen’s side and jumped at yet another opportunity to bash indigenous Britons in an editorial titled “Lily Allen’s right – it IS white males we need to worry about”:

All the statistics show they run the world, and all the evidence shows it’s not being run very well….It’s white men who prosecute the crimes, hand down the jail sentences, decide how little to pay female staff, and tell the lies that keep everybody else blaming each other for the world’s problems.

They even had the moxie to concede that if nonwhites were getting convicted of sexual assaults at higher rates than whites were, that’s only because England’s legal system is unfairly stacked with racist white juries. In essence, the Mirror was running cover not only for oikophobic Muslim apologists such as Allen, but for actual Muslims such as former British MP Naz Shah, who last year retweeted and “liked” the following comment:

Those abused girls in Rotherham and elsewhere just need to shut their mouths. For the good of diversity.