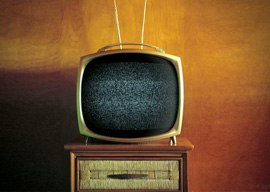 It’s happening again. Once more I begin to like a new TV show and it is canceled in a single season. My affliction goes back to the mid-70s, when Kolchak: The Night Stalker and Ellery Queen bit the dust in rapid succession.

This year there are two of them: ABC’s 666 Park Avenue and Last Resort. Granted, shows about a demonic Manhattan apartment building and a renegade sub and its crew might seem farfetched. But the writing is good and the themes”the limits of trust and loyalty and how much one is willing to suffer for a cause”are worth exploring intelligently. Fortunately, my other freshman fave, CBS’s Vegas, seems to be doing well”but given my track record, its stars might do well to keep an eye out for other employment just in case.

Probably 2010 was the worst recent year for my curse. Persons Unknown, The Gates, and”most notably”Happy Town were quick goners.

“We are ultimately the arbiters of our entertainment, and as a group we prefer crap!”

I do not have cable. This is a conscious choice. I will not get it for fear I would do little else than stare at the tube all day, a bit of saliva dribbling out of the corner of my mouth. So the networks and PBS provide the bulk of my TV experience, and as a result I have a great deal of time to get things done. The reality shows turn me off, but unlike the mystery and supernatural shows I like, they are seeming immortals: Survivor is happily looking forward to its 26th season in twelve years.

For me, sitcoms have been unwatchable since All in the Family made them relevant, and with the exception of Jeopardy, so are game shows. I grimly watch network news in the same spirit with which I continue the daily foray into the Los Angeles Times. It’s important to know what one is supposed to think. Daytime TV is worse, as soap operas are replaced by imitations of the hags from The View.

It may be that I have been cursed”that some character from Bewitched or Dark Shadows waved her wand at me. The superstitious part of me wants to believe that, but the truth may be darker still.

Could it be that at one of the annual meetings of the Bilderberg Group, the CFR, B’nai B’rith, the Freemasons, or the NAACP, an order was sent out from Conspiracy Central to corrupt the minds of America and the world by canceling any show that might make its audience think? This hypothesis makes an awful lot of sense, given the downward spiral in the nation’s political, cultural, and moral state. Moreover, the plan’s fiendish ingenuity is shown by the fact that the networks have agreed to commit hara-kiri in slow motion, offering ever more programming that ever fewer want to see. Thus ever more go to cable where a garden of delights awaits to snare the unwary. For consumers of garbage, there lurk more flesh and temptresses in the guise of Snooki manquÃ©s. Culture vultures and the terminally nostalgic will find all they need there. Our insane crypto-rulers shall soon reduce the vast majority of Americans to zombielike couch potatoes.