Let Us Have Gay Marriage, But not Yet 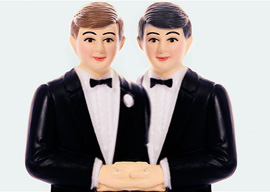 I have never shared or understood the moral prejudice against homosexual acts. Even as a boy, I thought the legal penalties were unjust. A quarter of a century ago, I wrote an essay in which, among much else, I called for gay marriage to be allowed.

There is currently a gay-marriage Bill before Parliament, and I have not changed my mind on the topic. I am still in favor of gay marriage. If two consenting adults want to live together in close union and can find a consenting minister of religion to bless their union, who are we to object? The same applies to polygamy, polyandry, incest, or any other kind of union between consenting adults. To a libertarian, the sole function of state marriage laws is to offer individuals a package of legal agreements and declarations that they could make for themselves if they wanted to find the money and time.

I accept that there are religious dimensions to heterosexual marriage and that there are utilitarian benefits, so far as strong and stable families give meaning to our lives and are a counterbalance to what might otherwise be the overwhelming power of the state. But these religious dimensions are something for religious believers to embrace. As for the utilitarian benefits, I cannot see how opening the package of legal agreements and declarations to other than monogamous heterosexuals should weaken family life. If two men are allowed to get married in front of a priest, I cannot see how this devalues my own civil marriage.

I also accept that gay marriage is not part of our traditions, and that traditions”especially those of English civilization”should not be attacked. But tradition is not a static force. It changes in the light of new facts. Changes in the law regarding homosexuality have largely followed changes in the social acceptance of homosexuality. We are not talking about the abolition of marriage and the bringing up of all children in state orphanages. It only involves the opening of a package of legal agreements and declarations to other than monogamous heterosexuals.

“The English liberal tradition is about the right to be left alone, not to make unilateral claims against others.”

If you are a devout Catholic or a devout member of various other denominations, you must believe that civil marriages, even between heterosexuals, are state-recognized fornication. You may also deny the validity of any marriage not solemnized by a minister of your denomination, or the validity of a marriage between persons previously divorced. If those are your views, you should not become a civil registrar. There is no place for religious scruples in conducting the ceremonies.

Still, I see no reason why anyone should be obliged to recognize homosexual unions. If I offer any kind of accommodation yet object to gay marriage, I should have the right not to allow two men to sleep with each other in one of my beds. If I am a pub-keeper, I should be at liberty to throw two men out if I see them kissing. If I run any business at all, I should not be required to employ known homosexuals or to keep them on if I later discover their tastes. Nor should I be required to invite their partners to any social events I may organize. Other people should have the right not to do business with me if I want to do any of this and to counsel others not to do business with me. But my right to do as I will with my own must be unquestioned.

The overall guiding principle here is that we have the right to life, liberty, and justly acquired property. From this are derived specific rights to freedom of speech and association, among others. But there is no right here to be loved, or included, or treated as equal in our private dealings. The English liberal tradition is about the right to be left alone, not to make unilateral claims against others.

The problem is that we live in a politically correct police state. Freedom of association has been largely abolished. Freedom of speech is not far behind. Our ruling class makes hardly any new law unless it can be used to subject us to more total control. Regardless of what safeguards on conscience are now promised, I suspect that the Bill before Parliament is the beginning of a process that it is hoped will end in the state control of religion.

We are moving toward this because Christians believe in a source of authority separate from and higher than the state. Until recently, it was the custom of absolute states to make an accommodation with whatever church was largest. In return for being established, the priests would then preach obedience as a religious duty. Modern absolute states, though, are secular. Such were the Jacobin and the Bolshevik tyrannies. Such is our own mild tyranny.