Let’s Make Up Some Unenforceable Laws, Come On, It’ll Be Fun 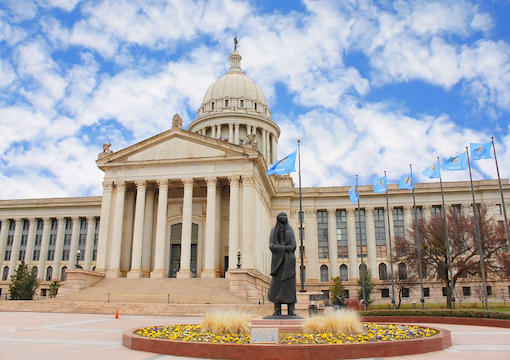 OKLAHOMA CITY—Maybe I’m naive about this, but I have to assume that anyone who gets elected to a state legislature, whether you’re in California or Alabama or Rhode Island, has been exposed at some point in his life to a civics class.

At my school it was a required course in ninth grade. You had to learn the various aspects of the three branches of government. You had to read and analyze the Constitution. You had to, basically, learn the architecture of the country. And in some states, like Texas and Louisiana, you had to study the peculiar regional laws that only pertained to you.

So when did we get all these clowns who intentionally pass laws that can’t be enforced?

And why are they doing it?

In Alabama they passed a bill saying any abortion after a fetal heartbeat could be detected is illegal. Since fetal heartbeats can sometimes be detected at six weeks, and since some women don’t know they’re pregnant until twelve weeks or later, it seems like the “undue burden” test is pretty obvious. There are even confirmed cases of obese women not knowing they are pregnant until they actually go into labor, so the fetal heartbeat test, which requires a Doppler ultrasound device operated by a trained professional, would assume that all women of childbearing age are stocking the house with a $5,000 piece of medical equipment so that whenever they have sex they can smear some gel on their suspect tummy and check for fetuses. Yet this piece of nonsense was not only signed into law by a female governor, it was announced proudly as Alabama’s contribution to the advancement of civilization. Did they even bother to read the 1973 Supreme Court decision? The test is “viability outside the womb,” which at the time was assumed to be around 24 weeks after inception. Today it might be closer to 22 weeks, but it’s not six, okay?

But Alabama is not alone in the “Hey, let’s pass a law guaranteed to be thrown out of court” department. In Illinois the legislature passed a bill saying that any corporation based in that state is required to have at least one female on its board of directors and at least one African-American. Again, did any of these esteemed politicians bother to read any of the fifteen or so court precedents from the past thirty years making it clear that you’re not allowed to base anything on race or gender? Were they all absent on 14th Amendment Day in ninth grade? How many times has the university system of California been spanked by the courts for various attempts to circumvent the ban against race-based admissions policies? It’s discriminatory on its face. If, say, a Chinese company decides to relocate to Chicago with a three-person board, they could fill two of the seats with Chinese nationals by bringing a Chinese woman with them, but they would have to search high and low for that African-American with dual citizenship who was also qualified to make decisions about their business. Of course, if they managed to find an African-American woman who understood the textile business in, say, Shaoxing, they would have the perfect board member, but she would probably charge them a million bucks a year just to come to meetings. Chinese companies do a lot of business with Africa, but Kenyans or Tanzanians wouldn’t qualify either—it has to be someone self-identifying as African-American. It’s an unenforceable law that discriminates against race, gender, nationality, and continent.

“When did we get all these clowns who intentionally pass laws that can’t be enforced?”

And speaking of California, normally representing the vanguard of new laws telling people how to live their lives, they were slackers compared with Illinois. The solons in Sacramento passed a bill requiring women to be included on corporate boards, but somehow they forgot to add the African-American part. I personally think there should be a professional bartender and a professional prostitute on every board, but I’m not dumb enough to think my proposal would pass constitutional muster.

At any rate this seems to be the season for lawmakers going into smoke-filled rooms and—well, actually, the rooms are no longer smoke-filled because they’ve outlawed cigars in every legislative hall of the nation and, hey, maybe that’s why they’re so cranky!—but going into purified-air rooms with humidifiers and concocting laws that they don’t realize are dead from Day One.

Or I guess the alternative might be “Yeah, we know it’s unconstitutional, we know it’s already been ruled out by the courts, we know it’s gonna get mowed down by a federal judge, but we just feel like fucking with people.”

And I guess Alabama is so prosperous these days, what with the Mercedes plant in Vance and all those electronic bingo parlors, that nobody minds the legislature running up a lot of legal bills over the next year. California you can kind of dismiss as being full of wacky megalomaniacs who believe they’re so far ahead of the curve that they can set standards for the rest of the world. But Illinois? What happened to that whole Sensible Midwesterner vibe they once had?

Of course, some of these legislatures could be full of States Righters—the guys who started the Civil War—because they actually did believe that no state law could ever be overruled by a federal court.

But I don’t think so. I think the real reason in all these cases is more sinister. I think they’re saying, “We don’t like things as they are, and so we’ll make it really, really expensive for certain people to enforce their rights. We’ll make them fight every day for what should be rightly theirs for free. We’ll take away their birthright. We’ll screw with their businesses and screw with their wombs and screw with their assumptions about what the courts have guaranteed them, and some of them will give up, and some of them will make mistakes, and we’ll just make sure they have many bad days, and eventually they’ll get tired of fighting with us and we’ll get a team of brutal lawyers to take them down and put them in their place.”

Well, okay, I guess it worked with the Indians. Go for it, guys.