Let’s Put Warning Labels on Everything! 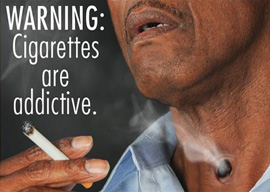 Yesterday our beneficent and merciful overlords at the US Department of Health and Human Services unveiled to the public a series of grisly images they’ll be forcing the tobacco industry to slap on cigarette packs in the hopes of dissuading consumers from ever buying their products. Here’s one of them. But why stop there? Big corporations and the people who produce things for a living make things that kill us all the time, and we here at Taki’s Mag feel they should be held accountable.

Therefore, we’re suggesting that manufacturers should be forced to put warning labels on everything. That’s right—everything!

Do you realize how many people get crushed to death every year in car accidents and in the process bang up their cars so badly, their surviving family members aren’t even able to drive them? We’ve made an ad for it:

Do the cow-slaughtering capitalists who run Big Beef feel the least bit ashamed for all the heart disease they cause? No, they don’t, which is why we’ve made an ad for it:

Are most Americans even aware that if they don’t get around an ounce of fiber daily, their ass will eventually fall out? Of course they aren’t, so we’ve made an ad:

And don’t get us started about Big Alcohol and all the broken families and rotted livers  it leaves in its wake. But we don’t expect them to take the blame, so we’re blaming them ourselves. Let’s put this ad on every bottle of alcohol produced in the USA and all of its satellite states:

Let’s hold hands, get creative, and help our government to meddle in everything imaginable!