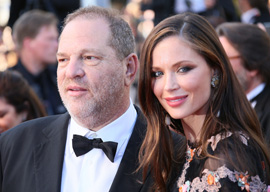 I smell a rat when it comes to Harvey Weinstein. Let’s take it from the start. The telephone rang very early in the morning and a woman’s voice told me that Harvey Weinstein wanted to speak to me. I was put on hold and I waited. And waited, and then waited some more. The reason I didn’t hang up was because I wanted to tell Harvey that if Queen Elizabeth had made me wait as long as he did I would have hung up. “But for you, Sir Harvey, I’ll wait an eternity.”

Well, Harvey is a Commander of the British Empire, but I upgraded him a notch because as strange as it may sound, Harvey and I are buddies. He’s a committed lefty, he’s Hillary’s pal, and he thinks Germans were all bad seventy years ago—he’s totally and catastrophically wrong on all three—but I really like him and he comes to my parties and I go to his. Last Christmas at my New York party I introduced Harvey to around twenty women, and he hit on all twenty of them. Good for him.

His lawyer Lisa Bloom, daughter of a real shark, Gloria Allred, was also on the telephone and asked me if I could confirm the details of a meeting between Harvey and a pretty assistant of his who had testified against him in a sexual-harassment lawsuit. Michael Mailer and I had been present because Harvey was interested in Nothing to Declare, the greatest prison book ever written by one Taki. (Published 27 years ago about an event that took place 35 years ago.) The assistant kept Michael and I company while we waited for her boss, and once he joined us and apologized for being late, I said that his assistant had been such pleasant company because, unlike him, she was great-looking. “And she is very good at her job,” added Harvey. Point of the story, if anyone had suggested anything it had been me, complimenting her about her looks.

“There is a lot to hang Weinstein with, and now that it’s out in the open, they are all creeping out of the woodwork.”

In America today, this could get one ten years in the pokey. The s- and r-words are what the J-word was in Berlin circa 1935. Except that Juden has been replaced by sexist and racist. It is 1984 again, George Orwell-style. In Harvey’s case, there is a lot to hang him with, and now that it’s out in the open, they are all creeping out of the woodwork. Even an ugly waitress has suddenly discovered that she “served the pig while he hit on women.” Funny how feelings of anxiety and degradation suddenly appear when these kinds of revelations hit the papers. What I’d like to know is how come it took twenty years, and others ten years, to come out with it. One of them, Rose McGowan, got 100,000 big ones for fending Harvey off at Sundance back in 1997, but then she spills the beans to The New York Times, which plasters it on its front page three days running. A Times columnist, a real phony called Rutenberg, describes Harvey’s shenanigans as stomach-turning; others in the Times can hardly hide their glee at his demise. (Rutenberg writes how ghastly it was when Harvey grabbed hack Andrew Goldman in a headlock and dragged him out of a party seventeen years ago. I applaud him for it. Hacks think they have a right to annoy and interfere and then lie, so Harvey did the manly thing.)

What troubles me is that the Times had a plan to destroy Weinstein, not because of what he was doing—which was long ago—but because they had destroyed the careers of two Christian conservatives, Roger Ailes and Bill O’Reilly, and now it was time for virtue signaling: time to destroy a lefty Jew who gives to feminine causes. He was not given time to defend himself, and in a way was railroaded, his business destroyed, his person reviled, his reputation worse than zero. Politicians are scrambling to give his donations to feminine causes, his board of governors has collapsed as three moneybags have cut and run, and Harvey is now as popular in La-La Land as one Adolf Schicklgruber.

The Weinstein Company without Harvey is nonexistent. He’s the one who cheerleads the product and wins Academy Awards. A boutique studio will not survive without him. The Times is hinting that Harvey should be tried and that his future depends on therapy. The idea that a paper that lies as regularly and as egregiously as The New York Times does is now the decider of the fate of a man like Harvey, who came from absolutely nothing, is horrible. Yes, he has acted inappropriately; yes, he has bullied women; yes, he has stripped and asked them to watch him in the shower; yes, he has suggested ad nauseam for them to get in bed with him. There are also hundreds of black professional athletes in America who beat up and rape women nonstop, but the Times turns a blind eye, as do others. Ashley Judd, who I’d give anything to go to bed with, should be ashamed of herself. She waited twenty years to join the rabble because Harvey asked her to sleep with him. She did not, so why bother to stick the knife in?