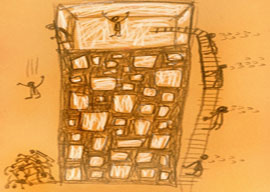 Not only is the Silk Road down and out, so is Atlantis, and so are the majority of illegal cyber-markets upon which the bad and the badder have depended for decades. The world below the surface is changing as fast as it is above it. The only remaining illegal Internet supermarkets currently are called “Black Market” and “Sheep Market,” reports my source in the underground. With the seizure of the Silk Road also came the loss of whatever amounts of bitcoin vendors were holding in their Silk Road accounts, ready for the next wholesale purchase. Bitcoin everywhere else remained safe and steady, holding its value at just over $140 in the last week with remarkably little volatility. The Silk Road vendors are “hurting,” they say, yet they’re lucky they had it so good for so long.

Never mind them. As you read this, the next tycoon of the subterranean is coming. Silk Road was the tip of the iceberg. Out there in the darkness lies much more underground resistance. Anonymized cyber versions of FedEx and DHL, hordes of faceless couriers, remain ready; illicit goods and services are in supply like never before, the same source confirms. Silk Road’s loss is everybody else’s gain. Consequently, each time the authorities cut off a head, another three heads pop up somewhere else. Medusa is impossible to kill. No wonder an exhausted UK police chief recently announced his urgent wish for a discussion of decriminalizing street drugs.

“The argument against prohibition is as certain, I believe, as the drug war is unwinnable.”

His argument was financial on one hand and moral on the other. We have a duty not to let career criminals make disproportionate amounts of untaxed cash, just as we have a moral obligation to help victims of the disease of addiction by removing the shadows obscuring their world. “The cracks let the light in,” Leonard Cohen sang. What if we flooded the world of vice with light? What if we treated the victims like patients or if we removed the need for them to prey on others or steal from themselves solely to fund their habits? What if we rendered the drug trade’s thugs financially impotent by removing the outsized profits they reap? Is the latter preferable to heavily armed and ever-escalating drug-war shootouts? Maybe not. Fifty percent of the profits are returned and never banked or laundered, experts believe. This 50% is divided up between runners, middlemen, and”the best paid of them all”corrupt ministers, officials, and lawmen.

One effect of drug prohibition’s putative end would be the negative impact on the revenues of global finance houses such as HSBC. “The world’s bank” became infamous last year for its laundering of Mexican and Colombian cartel monies, HSBC being the “preferred financial institution” for drug traffickers. This is according to US prosecutors who presented a decade-long probe into the practice of multiple-daily deposits that netted nearly $881 million for one cartel in Mexico alone, so Reuters reported. It’s not HSBC alone that should be faulted: How can any bank know every one of its customers? (Some argue that the same guy with gold teeth and wax mustache who deposits a maximum below-radar sum of $10,000 thirty times in a day may have been worth investigating. Similarly the toothless, hunchbacked old lady too poor to wear anything but rags, yet is offloading $300,000 in 10K cash bundles wrapped to fit under the teller’s window.) It’s the society in which the banks operate that is equally to blame. Money first, health and safety second.

Forget it. This issue is like one of those tedious arguments such as those for or against abortion or euthanasia, the kind of argument that goes on and on and on. The argument against prohibition is as certain, I believe, as the drug war is unwinnable. And let’s move on. There are other wars to fight!

There’s the global financial war, for one”to borrow Max Keiser’s phrase. While watching Russia Today I caught a rerun of Keiser Report and stood frozen in my dressing gown, listening for twenty minutes at the “idiot savant” that is Max Keiser, who is far from an idiot. He’s so clever, in fact, he has an interpreter, Stacy Herbert, sitting beside him to assist the audience in following his theoretical acrobatics, financial savvy, and pure wit. His subject that day was the idea of creating wealth through property, and the subject spoke to my heart.

As Keiser has it, the government trumps up the concept of using one’s home as equity in order to serve the government’s needs rather than the average customer or homeowner’s needs. New “help to buy” and “buy to let” schemes, assisting out-priced buyers in obtaining mortgages from miserly lenders, constitute further examples of the evil incentive to hold as much debt as it is possible to bear. Many people live their entire working lives in hock to the bank: a slave to their mortgage and a slave to their wage, making for a vicious cycle that’s hugely profitable for banks (in profits) and nations (in taxes).

It doesn’t have to be this way. In continental Europe the majority of home dwellers rent for most or all of their lives. I first heard the grim phrase “property ladder” when I was 21 years old and considering buying an apartment which looked onto Kensington Palace”or “Club KP,” as it used to be known. “Get on the property ladder as soon as you can,” a middle-aged man admonished me. And in so saying, this person put me off the idea of property ownership for life. I don’t know about you, but I don’t want to be on any kind of ladder. By definition, a ladder is not a safe place to be. It’s a means to an end at best.

Really, the much loved “property ladder” clichÃ© is simply a naked exhortation to half-buy and half-borrow to pay the bank to own half your house and to take it away if you lose your job! Why? Because it makes financial sense (to them)! This exhortation is founded on the myth, or the reality”depending on your viewpoint and home location”that house prices, like the capital markets, will always rise over the long term. We’ve seen in London and New York in the last few years that this is not true. Admittedly, such cities over time see property prices rising in the same way that, over a longer timeframe, the capital markets mostly finish up, not down. While often true, the exceptions prove the rule; and in this area the exceptions can be fatal.