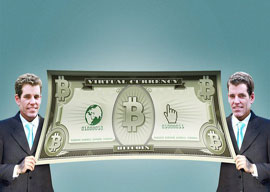 “It’s officially over,” commented one party animal. The drug supply chain suffered a (this time) devastating blow as the FBI seized and shut down the Silk Road, the best-brand illegal drugs and services cybermarket. Party’s over (for a few days).

The moment may have arrived. The future of bitcoin has edged a little closer.

As of Thursday, after the FBI bust went down, and not for the first time, it seems that the Internet currency bitcoin (BTC) will enjoy new status as a legitimate legal tender, now that it is washed of its junkie and wholesale-drug-dealer image. It is free of its association with Silk Road, which was officially founded (per Wikipedia) in February 2011, but in fact has been around a lot longer. Atlantis is the next-best brand of cybermarket, and its URL is easily obtained through the Tor hidden-service portal: Most of the illegal business will move over to the underwater city. It’s certainly where the buyers will be going and the Silk Road vendors already have Atlantis accounts set up to meet the rising demand there.

Now bitcoin has a chance to flourish, not as a tender for the sale and purchase of narcotics and fake Hawaiian driver’s licenses, but as a literal new currency as the Winklevoss twins would have it. Bitcoin has an opportunity to become a new benchmark. Let’s call it the benchmark of anti-relativity.

“The future of bitcoin has edged a little closer.”

What does that mean? It could mean a number of things. A new currency (BTC) now has the chance to be built up from a different world of both data and supply/demand and for different needs, to serve motives other than the existing benchmarks, i.e., the traditional $, £, ¥, and “¬ you see in the corner of your TV screen. One day you might see BTC at the end of this row.

The currencies above gyrate relative to each other in some kind of psychedelic quadrille that only banksters with Ph.D.s in quantum physics can explain. BTC seems to have established little, if any kind of, relationship with the other four global currencies singly or as a group of four. To me this indicates an opportunity.

Make no mistake: bitcoin or no bitcoin, we are at the dawn of a(nother) new age”the Internet of money, as the Winklevii so eloquently put in the public statement accompanying the pre-launch of their bitcoin ETF. Their wager is only a $20M bet on bitcoin”30% of the payout of their Facebook lawsuit. And yes, at this point bitcoin is young, an infant. It’s insignificant in scale. Its possibility as a game-changer lies not in the scale but the paradigm, as in the way the citizens of the future will conduct their transactions.

Infancy into youth, youth into adolescence (with which the euro is now struggling)…you never know, the BTC may keep marching upward and outward. It may become a part of our lives, the coins in our virtual wallets.

The value of the BTC currency has hovered north of $120 for most of the last year. It dipped on the day of the Silk Road bust, then recovered in under a day, closing at roughly the same price of the eve of the bust, or at $131.70, according to Mt. Gox, the oldest bitcoin exchange. “The bitcoin, valued by many for its anonymity, fell to $129 from over $140 a day before, according to…Mt.Gox. Earlier, the currency traded as low as $110,” Reuters reported.

Adolescence into maturity, it may well be that the bitcoin follows a more robust growth cycle than the euro as the Internet continues to take over our lives. It may take a few years; it may take ten or twenty. Yet the opportunity is there and it’s the youngsters, not the banksters, who will push the growth. There are believers. Delusional or not, it’s irrelevant. If these believers gather ranks, the future of BTC is not only secure (it already is)”it’s rosy.