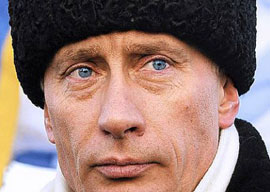 What a week. To my surprise, World War III was averted, and I have some insider information as to why. My source in Texas, where you”ll find a surprisingly strong intelligence community (a lot of former operatives retire to Texas), especially in and around Austin”my source tells me that Vladimir Putin’s change of heart is as much the result of intervention from the spirit world as it is positive personal intentions on Putin’s part. Hard to believe? My source is ex-CIA and his sources are very much current.

It turns out that Vladimir Putin has privately been seeing, for over a decade now, the “qigong master” Wang Lin, also known as “White Dragon King””Bak Lung-wong (ç½é¾ç)”a title second only to the Grand Pure One, TÃ iqÄ«ng (å¤ªæ¸). Wang, who died last month aged 61 in human years, was a Chinese mystic courted by, and often responsible for the careers of, many a Chinese or East Asian celebrity”Jackie Chan and Jet Li included. I know how close you are with Jackie, and so I know how convincing this fact will be in support of the legitimacy of the late Dragon King.

Qigong, in case you don”t already know, is roughly translated as “Life Energy Cultivation,” an ancient practice of aligning breath, movement, and thinking in order to fulfill one’s life potential. Wang has had his detractors, but President Putin was not one of them. The Russian premier was in fact a devotee of the grand master, as per my source; spending much time, as Putin does, in the People’s Republic on business. Wang is known for “conjuring live snakes out of an empty pot; [for] filling an empty glass with wine that seems to have come from nowhere; and breaking a stick by simply breathing on it,” according to a piece in the South China Morning Post, August 29th. Wang Lin breathed success into, and sometimes rescued, the careers of many a VVIP in Mainland China and Hong Kong”where he later fled.

Much of Vladimir Putin’s huntsman’s prowess”the well-publicized killing of a Siberian tiger or two, for instance, which is said to have been executed purely by the Russian president’s “mind power,” as per witnesses that the biased Western press ignores”this mind-slaying prowess is attributed solely to White Dragon’s training in confidence. As befalls those blessed with great powers, it must be noted that Wang Lin was no stranger to detractors, either. Payments to Wang Lin for his private tuition have been criticized for their size as well as their legitimacy”to the tune of HK$41 million, to name one recent example, a sum a former tutee was ordered to pay the grand master by a Chinese court.

“There is no category in the medical literature to date that covers the eventuality of a happy suicide.”

Wang Lin, you see, was a self-made man”like President Putin, but even more so. Both men enjoyed favor among government officials and, consequently, one understands their good relations in Russian and Oriental society’s upper echelons. Both men are billionaires: Wang’s fleet of high-end autos included three Hummers and a Rolls-Royce. The vehicles of a Supreme Being, or one who deals in “Interactions between Heaven and Hell,” must match their purpose. Wang was once imprisoned by the former hardline communist regime, and a prison cellmate of Lin’s declared in public that the master possessed no special powers at all while he was in the clink”though he went on to manifest such skills as curing cancer on sight, and this is indisputable…if a smile on a previously depressed patient’s face is proof of remission. You can YouTube these cures and judge for yourself.

My source informs me that Putin and Wang met roughly every six months in private, often at Wang Fu Palace in his hometown of Luxi, Pingxiang Province. Here they feasted on shark fin and bear claws. (The latter is a favorite of Putin’s.) Wang has publicly threatened critics before, warning them he could kill them on sight”a skill known as “telekinetic assassination.” It is rumored and feared that Wang may have imparted this skill to Vladimir Putin, a muscle man and an adept of machismo in general”and a natural when it comes to the dark arts of survival in the food chain. See the legends of bear fights that Putin has fought, and won, bare-fisted and single-handedly.

The insiders” conjecture, based on gossip emanating from the political classes in Moscow, says that when Wang Lin passed away in August, Putin acquired the highest, most difficult level of confrontational qigong skills. These are said to include telekinetic “slaughter,” to translate it literally, as well as many more positive aptitudes, along the lines of healing the near-dead and felling an orchard with a glance. While Putin considered his riposte to the West following the alleged chemical-weapons assault on hundreds of innocent citizens in Syria”a country he calls a friend”the Russian premier’s rhetoric had grown increasingly adversarial. I was worried by his stance right up until the end of last week.

When something in Putin shifted, thank God”for those who believe that war begets war, and/or that a Syrian intervention would backfire. It depends on how you view Libya, which, the way I see it, was a success due to the French taking the initiative and the combat remaining narrow, as opposed to the Iraqi and Afghan fiascoes. Having squared off, if not scared off, President Obama and company at the G20 Summit, Putin abruptly changed tactics, implementing a brokerage initiative that may yet protect Syria’s ravaged citizens from more chemical-weapon attacks.

What happened? Why then did he change position? According to my source, Putin was unwinding on the terrace of his hunting lodge outside St. Petersburg a day after the summit’s acrimonious end”when a snake appeared out of thin air, literally dropping from the air; and the snake allegedly “spoke to him.” As if it were not proof enough of a supernatural intervention, minutes later an orange”freshly hand-picked, imported from Marbella, and placed beside Vladimir during a siesta in case he grew hungry”an orange which the president picked up and split open, revealed, to his astonishment, a fresh “¬500 bill. Knowing full well this was a trick of the recently deceased Dragon King’s, the bill, while he stared at it, caught fire sui generis and burnt itself to ashes in Putin’s hand (and without harming it). This proof was conclusive. In the late Wang Lin’s trick, a burnt renminbi bill’s ashes would be injected inside an unopened orange”which the grand master would pick up and from which he would extract a fully intact, single rolled-up renminbi bill from inside the fruit.

My source credits the “autonomous” event as the real reason behind the premier’s decision to cooperate, to forge peace by sequestering chemical weapons in Syria in accordance with the wishes of most leaders of the West (but not of Ed Miliband’s). I too was inclined to wish that Bashar al-Assad be turned into ashes inside an orange and for the orange then to be thrown away; considering, as I do, the deployment of chemical weapons to be unpardonable. It seems, fortunately, that the ingenious and immortal magic of Wang Lin’s got there first. And in so doing, he averted a possible escalation of power over Syria that might well have led to greater violence or even World War III. After all, it only took the assassination of an archduke to incite the First World War. Putin may just have been drawing his final conclusions on the Syrian affair that afternoon”and supplying Syria with (more) weapons was but one of his publicly stated options. No doubt he has the wherewithal to exact further damage against Syria and the West, though not as much as he would have us believe, so strategists like George Friedman have said, in the latter’s article of September 10th, entitled “Syria, America and Putin’s Bluff.” Wherein he argues that “Putin is bluffing that Russia has emerged as a major world power. In reality, Russia is merely a regional power, but mainly because its periphery is in shambles.”

Friedman goes on to argue:

In fact, Russia remains a shadow of what the Soviet Union was. Its economy is heavily focused on energy exports and depends on high prices it cannot control. Outside Moscow and St. Petersburg, life remains hard and life expectancy short. Militarily, it cannot possibly match the United States. But at this moment in history, with the United States withdrawing from deep involvement in the Muslim world, and with the Europeans in institutional disarray, it exerts a level of power in excess of its real capacity.

And yet he didn”t opt for increased weapon supply, despite his showmanship of disregard. Grand master Wang Lin would doubtless approve of Putin’s decision, as he was, it appears, a peaceable man”excepting rare moments like the time he was claimed by a reporter to have faked his supernatural powers. He of all people; he who, for example, had cured President Suharto of Indonesia of a life-threatening disease, he who spread goodness from his pure mind directly to others” minds and bodies. (Regarding this journalist in question: “I am telling you,” the White Dragon King proclaimed via news broadcast. “You will die miserably, and your family will follow,’’ as the Beijing News quoted him.)

If you doubt any of these details, consider this fact, reported in another dispatch September 2nd. The South China Morning Post, one of the freer publications in China, was covering the funeral of the White Dragon King, attended by the crÃ¨me de la crÃ¨me of Asia-Hollywood, and this is what it had to say:

By coincidence or, as some followers believed, the supernatural power of [Wang Lin], claps of thunder accompanied the gongs and drums at the moment [Wang] was buried, though the sky was clear just minutes before. Some pointed up, claiming a stretch of cloud, over the newly built hall where Chau was buried resembled a dragon….