Letters of a Screenwriter in Trouble 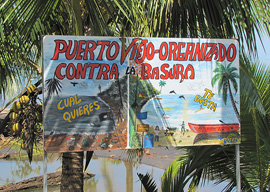 So I made the crossing over to Panama just fine, at least from the legal point of view. Despite the guards’ Rottweiler expressions, they can’t even be bothered to swat a mosquito in that humidity, let alone police the border. And I get the feeling the cartel is doing most of”in fact all of”the policing hereabouts.

Now if things were bad in Puerto Viejo the last time we were together in Costa Rica, they’ve gotten worse still. So much so, I was pleased to see the passport official’s fat belly, and decaying teeth. The good news is that it seems Panama is still content to accept most anybody across the border. In a world where the real frontier is digital, I took a certain pleasure in walking across the bridge over the Rio Sereno, where the holes in the planks are still not repaired.

The scene in Puerto Viejo is so bad, the authorities left the township entirely to its own devices. Now, when a crackhead goes berserk, they literally tie him to a telephone pole with second-hand duct tape then leave him there, writhing in the hot sun for up to three days, or however long it takes for the epileptic-style twitching of his acute withdrawal to wear off…to the extent that exhaustion does finally overtake the poor wretch and he will stop mugging everybody in sight or practicing his idiosyncratic form of violence, a nervy jiu-jitsu style you won’t find in the phonebook but which I can describe as…”spasticus artisticus”…?

“Like the end of US governance in Baghdad, the Western world economy feels as if the last plane has taken off, once and for all.”

The situation in Puerto Viejo descended to the point where, as I got off the bus and strolled into town, dusk descending, I was greeted by a new species of creature Darwin never accounted for: the crack whore. These ladies resemble robots more than human beings: They follow you around, walking in a kind of moonwalk, like Michael Jackson if he was made of used car parts. They followed me despite my seasoned air of indifference, or false purpose, because, you see, they knew better. And right they were. And because, and here’s the rub: nobody has any purpose whatsoever in Puerto Viejo. (Unless that purpose is robbery or drug dealing).

The only redeeming feature of my hotel room was a half-working satellite television. As you know, the world of communications is dear to my heart. I like to stay abreast of current affairs in this failing star we call Planet Earth. And there was something prophetic on that crackly channel transmitting CNN last night, the headline being: “Where now for Apple?”

Apple, as in one of the cash-richest companies in the world whose stock price, you may or may not know, has been languishing at about 40% what it was this time last year. Somehow, and call me deluded, somehow it seemed to me that the two things were not disconnected.

Three things, in fact. The unholy trinity was:

1. The state of affairs in Puerto Viejo and in many similar coastal towns between Colombia and the border of the Republic of Texas.

2. The falling stock price of AAPL.

3. The generalized, long-suppressed anxiety felt equally by the man in the street and the leaders of the G20.

The feeling that, well, something’s just not quite right. And it hasn’t been since”well, since at least October 2008. Like the end of US governance in Baghdad, the Western world economy feels as if the last plane has taken off, once and for all”and we’re left here on the ground with what exactly? Like somebody crashed the party and nobody knows what to say to them, not least our business leaders, not until they can find out who they are, what they’re selling, and if it’s cross-collateralized. To listen to our business leaders you’d think they were speaking Esperanto. Somebody needs to school these mofo’s (not to mention the politicians) how to make a real statement, one that’s not self-negating due to intentionally bad grammar, a by-product of the advice their lawyers gave them in order not to put a foot wrong, to keep the stock price stable. Does anybody speak the truth today?