Leveling the Playing Field (With Explosives) 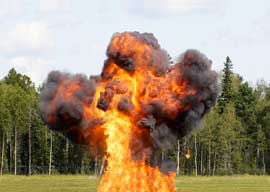 There is only one real political question: Are people equal or not?

All political distinctions”whether left or right, individualistic or collectivist, libertarian or totalitarian”depend on how you answer that question. It strikes right at the root. Everything else is a distraction.

If you start with the premise that people are equal, then disparities in income and intelligence between groups will be blamed on the phantom demon known as “injustice,” and all your political energies will be spent trying to, as the tiresome saying goes, “level the playing field.”

But if you start with the premise that they aren’t equal, nearly all inequalities can be explained by, well, inequality“in other words, the idea that the playing field started out level, and inequalities began emerging when certain groups and individuals proved more adept than others. You will therefore view any attempt to “level the playing field” as artificial and essentially contradictory”to achieve equal results, one must instead tilt the playing field so that all the players appear to be the same height. The chief goal of “diversity” is, ironically, to make everyone the same.

“To achieve equal results, one must instead tilt the playing field so that all the players appear to be the same height.”

If you believe that inequality rather than equality is the way of the world”that things are essentially vertical rather than horizontal”most measurable differences in wealth and accomplishment can be blamed on unequal abilities rather than unequal treatment. Yes, there are many mitigating factors. Not everyone has the same opportunities in life. But if the same patterns persist despite all other things being (ahem) equal”say you give everyone the same education, and Asians continue outperforming whites in school, who continue outperforming Hispanics, who continue outperforming blacks”a logical person would conclude that we’re dealing with innate inequalities, whereas an emotional person would blame unfairness. And to rectify this alleged unfairness, the emotional person would insist we set policies that mandate an inverse form of unfairness until everything is, well, fair.

Enter affirmative action. And racial quotas. And preferences in education and hiring. And tax breaks for contracting with minority-owned businesses. And the insane notion of “disparate impact,” which tries to argue that even if everyone is treated equally on the front end but they still don’t wind up equal on the back end, there was still some sort of “discrimination” going on even though there clearly wasn’t.

Webster’s offers two definitions for the verb “to discriminate.”

The first is “to unfairly treat a person or group of people differently from other people or groups.”

The second is “to notice and understand that one thing is different from another thing…to recognize a difference between things.”

These two descriptions are so incompatible and contradictory as to be comical, yet they cut to the heart of the political divide. If one dares to notice that two things are different, it would follow that you would treat them differently. It would only be “unfair””at least to whichever of the two things you deem to be better than the other”to treat them the same. And even if you treated them as if they were the same”i.e., if you didn’t discriminate”and they were innately different, they still would wind up unequal.

I’ve never seen anyone try to claim that unequal results in sporting events are due to injustice. They’d be laughed off the playing field. I’ve never met anyone who says they believe in innate physical equality. The differences are right there in front of our eyes. There are reasons why Central Americans don’t do well in the NBA and that Lebron James never embarked upon a career as a horse jockey.

But the thought which cannot be spoken”pretend it’s the Middle Ages and you’re denying Christ’s resurrection”is to so much as suggest that there are innate cognitive differences between groups of different continental origins (or, if you prefer shorthand, different races). To suggest such a thing is to imply that there are reasons for measurable differences in wealth and accomplishment that go beyond the infantile notion of “injustice.”

It’s a laff riot to watch modern progressives”they’re supposed to be the “intelligent” ones, right?”try to explain why affirmative action fails to make people equal. This is from a Slate article bemoaning the fact that Richard Nixon was affirmative action’s main presidential architect:

…the liberal establishment pinned the economic hopes of the civil rights revolution on a program set up by a president whose racial philosophy was based on the idea that blacks make great athletes and Asians are good at math.

Oh, I see”that’s a “philosophy,” nothing more than a belief. It’s not a statistical fact that blacks make great athletes and that Asians are good at math; it’s the stillborn hatchling of a diseased brain.

Here’s the American Prospect explaining why those of African origin always seem to wind up with a “disadvantage”: