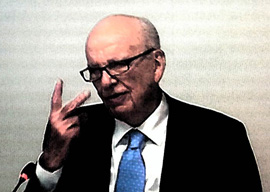 A venerable British political tradition dictates that whenever some important matter arises, the government commissions an inquiry chaired by a renowned expert. This expert duly conducts a thorough investigation”which sometimes takes years”at great public expense, eventually producing a highly detailed report. The government (sometimes by then a new one) welcomes the report, thanks the expert, and then ignores all or most of its recommendations. The government’s chief aim is that they have been seen to be doing something”and that if they can defer doing something for long enough, most people will forget all about it.

It is too early to say whether this will be the fate of the 2,000-page Leveson Report into press practices and their links with politicians and the police, published with a groan on November 29th. Leveson comes with cultural momentum and the backing of powerful forces, from Labour to phone-tapped celebrities, all exploiting the symbolic suffering of genuine press victims such as Christopher Jefferies.

“Downing Street may secretly enjoy having the whip hand over the press.”

Ed Miliband, who appears to lie in wait for approaching bandwagons, has no qualms. Within sixty seconds or so of the Report‘s issuance, he announced he would accept it “in its entirety.” He may come to regret his impressive speed-reading skills, because this “entirety” includes a footnote stating that the Independent was founded in 1986 by Andreas Whittam Smith, Stephen Glover, and Brett Straub”two well-known journalists and the third a 25-year-old Californian whose practical-joker friend had added Straub’s name into the Independent‘s Wikipedia entry.

Less amusingly, if more importantly, David Cameron has also said that he is “determined” to see Leveson‘s principles implemented and therefore has instigated cross-party talks. Yet these talks are faltering, with Labour already drafting its own policy. Political practicalities will almost certainly prevent full implementation. The eminent judge has strained for sixteen months and brought forth a political football.

Leveson is highly ambitious”ending self-regulation, a new code of press conduct regulated by an independent body with the ability to fine newspapers up to £1,000,000, or one percent of their turnover. This new body should be underpinned by legislation (although, crucially, not statute) and should contain no serving editors or MPs. There should be rapid arbitration to deal with complaints and wider powers to deal with breaches of data confidentiality.

The new agency”supervised by an old agency, Ofcom”will offer legal protection to journalists who feel uneasy about what they are being told to do, and “ethical advice” to police officers about dealing with the press. Senior police will be required to record and summarize all contacts with journalists and should be dissuaded from “consuming alcohol in a setting of casual hospitality” with them. Media that adhere to the new scheme will be allowed to use a “kite mark” to demonstrate their loyalty to the regime.