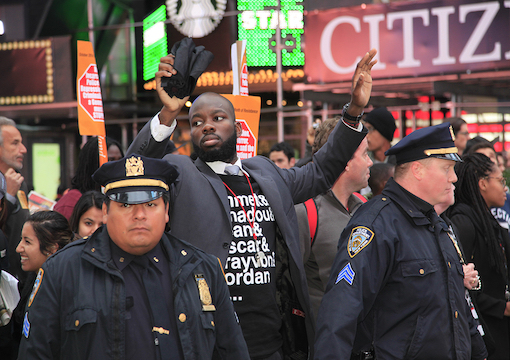 This week, we’ll look at two tweets that encapsulate everything that’s wrong with the “white privilege” narrative consuming our nation.

The Twitter account @nowthisnews posted a video of shutdown protesters yelling at police in California, Colorado and Michigan with the heading: “What would happen if protesters of color acted this way to police?”

Audra McDonald (@AudraEqualityMc) responded: “We’d all have been shot dead. Next question.”

Unless Ms. McDonald is a time-traveler from 1965, I can’t imagine what she’s talking about. Was she at the Sharpeville Massacre?

McDonald is an actress, and therefore I assume an idiot, but her profoundly ignorant tweet was enthusiastically endorsed by MSNBC talking heads and, at last count, had more than 16,000 “likes” and thousands of retweets.

Are they talking about Ferguson, Missouri, where cops stood by during the 2014 riots and politely watched the city burn? In response to the police shooting of Michael Brown — a shooting that both the grand jury and Eric Holder’s Justice Department found was justified — mostly black protesters raged off and on for months, torching dozens of buildings, shooting at responding firemen, looting stores and throwing rocks at the police.

“The most recent black protest that was met with police violence was Selma, 1965.”

To the contrary, two policemen were shot by a black protester.

It was the same thing at Black Lives Matter protests across the nation — in Baltimore, Oakland, Dallas, Baton Rouge and so on. Cops stood mutely, as water was dumped on them, their patrol cars were set on fire, rocks were hurled at them and protesters screamed obscenities in their faces. Their marching orders: Do nothing unless you see a crime being committed in front of you — and not always even then.

We’ve had Al Sharpton protests in New York City for decades. No protesters shot dead. In fact, I can’t think of a single protest in the 21st century by black people, or by white people, that police have responded to with violence.

When was the last time? You have to go back to the Democratic National Convention protests of 1968 — and those protesters were white. If we’re including the National Guard, there was Kent State in 1970 — also white protesters. The most recent black protest that was met with police violence was Selma, 1965.

Can we restrict wild generalizations about the police to things that have happened in our lifetimes? If you can produce examples of black people being billy-clubbed merely for protesting, we’d all love to see them. We’re looking for something more recent than 1965.

What would happen if protesters of color acted this way to police?

Audra McDonald: “We’d all have been shot dead. Next question.”

Why not, “They’d bring back slavery. Next question”? It’s just as insane.

Facts don’t matter because the “white privilege” craze is just a fashion statement.

What opinions do I need to have to be fashionable? I’m so busy, I go to a lot of dinner parties. Could you fix me up with some opinions?

Absolutely! You want to talk about “white privilege,” “racist cops” and “systemic racism” — using these phrases will get you wild applause.

Liberals are so mesmerized by racism fantasies that they don’t look at their own evidence. The video posted by @nowthisnews shows white protesters expressing their opinions volubly at the police. If the protesters were black, these would be called “peaceful protests.”

In one clip, a white guy shows up at a Denver rally with a holstered gun. Then you see the cops handcuffing him. The end. Explain to me how that’s an example of “white privilege.” I think it’s more an illustration of “white protester being subjected to the operation of the law.”

LIBERALS: It’s a white male with a gun! Nuff said.

JUDGE: Did you look at this tape, counselor? Meet me in chambers. I’m trying to help you. This is defense evidence.

Everyone’s already forgotten about those racist murders. (Admittedly it was four long years ago, not nearly as recent as 1965.)

Even at the time, the Democratic Party couldn’t support the assassinated officers without eulogizing Black Lives Matter. Days after the Dallas slaughter, President Obama invited Black Lives Matter representatives to the White House.

Hillary Clinton went to CNN to give her considered response to the bloodbath in Dallas. Ignoring the dead officers, she cited a string of recent police shootings, pledged to “go after systemic racism, which is a reality” and called on “white people, like myself, to put ourselves in the shoes of those African-American families who fear every time their children go somewhere.”

This, as the corpses of five white policemen lay in a Dallas morgue, basking in their “white privilege.” Or as Ms. McDonald would say, “Shot dead. Next question.”