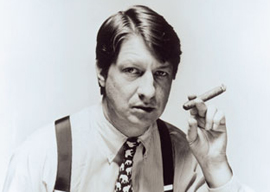 Some thirty years or so ago, my friend P. J. O”Rourke came to dinner at my New York house with what was then his new bride. She was beautiful, reserved, intelligent, and after dinner she called me a male-chauvinist anti-Semitic racist before leaving the house in a fury. P. J. apologized and followed his bride out. To this day I haven”t figured it out, nor has P. J.

They didn”t stay married long enough for a serious inquiry to take place, and P. J. is now very happily married to his second wife Tina and has a large brood as proof of his happiness. The first Madame O”Rourke was the granddaughter of the beautiful black singer Lena Horne. Her father, movie director Sidney Lumet, passed away recently. I was not aware of her father’s extreme liberal credentials, although I should have known after sitting through Dog Day Afternoon, a shameless homage to a queer bank robber who needs the money for his boyfriend’s sex change.

“It was a typical New York discussion, full of platitudes and class-war generalities.”

Looking back at that evening I realize that alcohol, too, might have played a role, as good old P. J. and I are known to have a tipple once in a while. I might have voiced certain opinions, such as how black-on-black crime is publicized more than black-on-white crime or that many Wall Street white-collar criminals happen to be Jewish. I had forgotten that elite liberal cosmopolites such as the lady in question do not take kindly to certain truths.

And the lady’s liberal credentials were impeccable. Lena Horne had undeniably suffered from racism in her brilliant and long career, and her old man was one of New York’s most famous defenders of the downtrodden. The trouble was, and is, the latter. Who were then and who are today’s downtrodden”the welfare recipients, the drug addicts, the illegal immigrants, the single black mothers, the unemployed”who exactly? That was the subject discussed that infamous evening, and if memory serves, I had said that the cop on the beat, the grunt on the firing line, the slum priest, the law-abiding, taxpaying citizen was the victim, and then all hell broke loose. It was a typical New York discussion, full of platitudes and class-war generalities. It’s a wonder I didn”t leave my house first.

Although America had gone through unpopular war strife during the late 60s and early 70s, liberals sold a noble vision of a new dawn, a problem-solving, progressive hope that the culture would change once the government threw more money into the pot”money that would eradicate poverty and crime forever and ever. The people perpetrating the hoax didn”t believe it for a minute, but it sounded good during chic dinner parties where rich, with-it elites met to discuss the theater, politics, and rising crime. (Tom Wolfe eviscerated them with his satiric essay on Leonard Bernstein’s party for the Black Panthers.)