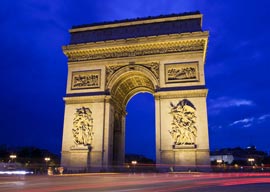 Last week’s Paris massacres of cartoonists and Jews might suggest to a dispassionate observer that endless mass immigration to France from the continent of Africa isn”t working out as well as expected, and thus it’s time to cut back.

After all, when you find yourself in a hole, the first thing to do is to stop digging.

But there hasn”t been much willingness on the part of the European establishment to admit mistakes. I”m going to suggest a simple, relatively low pain way for the French ruling caste to swallow their pride and rationalize backing away from their unsustainable immigration policy.

First, though, let’s consider just how deep of a hole France is in. As the country with, arguably, the finest real estate in the world and the closest imperial ties to Africa, France is a natural destination for the burgeoning billions of the most impoverished continent.

The latest United Nations population figures estimate that the population of the African continent grew from under 0.5 billion as recently as 1980 to 1.1 billion in 2013. From here, the UN demographers forecast the continent’s population mounting to an immense 2.4 billion in 2050 and to an unlikely 4.2 billion by 2100, which is only about one lifetime from now.

A decade or so ago, the UN’s demographers had a more optimistic view. The message back then, says Hania Zlotnik, who was chief of the UN Population Division at the time, was that “the population problem is essentially over, because fertility is coming down automatically. We know now that was wrong.”

Only recently did the UN demographers stumble upon the horrifying discovery that their earlier forecasts had been based on short counts in African censuses caused by characteristic sub-Saharan incompetence:

Over the past decade or two, it has become clear that fertility is falling much more slowly in some countries in sub-Saharan Africa than it did on other continents. That realization has come gradually because vital statistics in Africa are so poor. Between 2010 and 2012, for instance, UN demographers raised their estimate of how many babies African women had recently been having by a quarter of a child per woman. Population grows like a bank account with compound interest; a quarter child more per woman today generates 600 million more Africans in 2100, according to the UN projections reflected in the Science paper.

Of course, the population resident in Africa is almost certainly not going to quadruple over the next 85 years. Instead, one (or more) of three things will happen: they”ll die young in vast numbers in Africa; huge numbers will move to other continents; or Africans will finally make good use of family planning.

“All the French have to do is pause in warring upon each other ideologically and agree upon fairly simple ways to defend their homeland from inundation.”

I prefer the third alternative. But that’s out of fashion. Up through the 1970s, progressive Westerners encouraged Africans to engage in population control. But then they stopped, because racism. Why should Africans take responsibility for moderating their own fertility when African mothers can simply immigrate to the banlieue outside Paris, where their sons can amuse themselves by burning cars?

But that’s hardly inevitable. It’s not 732 A.D. and the incoming Muslims don”t represent a more technologically advanced civilization that will be difficult to stop. For instance, the serious country of Israel has erected impermeable razor wire fences to keep Africans out and imposed Depo-Provera contraceptives on the Jewish Africans it let in during the 1980s.

All the French have to do is pause in warring upon each other ideologically and agree upon fairly simple ways to defend their homeland from inundation.

But will they do it in time?

The fundamental problem is that the French are a successful people. And as North African sociologist Ibn Khaldun pointed out in the 14th century, prosperous cultures tend to lose cohesion and turn to backstabbing, which leaves them prey to hungrier tribes. In the Tunisian’s telling, the history of North Africa consisted of endless cycles of Mediterranean urbanites becoming soft and corrupt and in turn being replaced by desperate clans out of the south.

But the French can learn. It’s been done. During the energy crisis of the mid-1970s, for example, Continentals largely stopped importing immigrants upon economic grounds.

After that, however, various forms of immigration fraud, such as arranged cousin marriages, kept immigration going, helped along by censorship of critiques.

But in 2001, the supposedly “far right” Danish People’s Party did well in Denmark’s election. They subsequently helped push through sensible reforms such as making it harder for Muslim patriarchs to force their teenage daughters into arranged marriages with first cousins from back in the old country. The Danish democracy raised the age at which residency permits are handed out to foreign spouses to 24. This appears to have helped bring down the total fertility rate of non-Western women in Denmark from 3.4 in 1993 to a more manageable 1.6.

But any kind of public discussion of reforms to cut down on this kind of exploitation of Europeans is demonized as extremist.

Why? One stumbling block to better policy these days is the refusal to admit you were wrong. To advocate different policies tomorrow is seen as admitting that your ideological enemies were right yesterday. And that’s hard to do.

So here’s a simple suggestion to help public figures overcome their pride: don”t admit you were wrong in the past. (The past has passed. You and your descendants are going to have to live in the future.) Instead, attribute your change of mind about immigration policy to the very real phenomenon of diminishing marginal returns.

A fundamental observation of economists since the 1700s has been that novelty value tends to wear off. For example, if you were a Frenchman who thought your country’s cuisine wasn”t vibrant enough, you might have once recommended importing a few Africans to bring with them knowledge of their foods. But the nth+1 couscous cook is going to be less valuable than the nth. Thus, the first African in France was more useful to the French than will be the ten millionth African. Eventually, enough is enough.