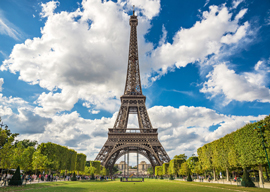 For a number of years I used to write a weekly column in the British Medical Journal about medicine and literature. The field, of course, was vast, inexhaustible, because medicine deals with birth and death and everything in between”as does literature. Many doctors have taken to the pen, a surprising number of great writers had doctors for fathers (Dostoyevsky, Flaubert, and Proust, to name but three), doctors appear frequently as characters in literature, and scenes of illness are likewise very common, some accurate and some preposterous. Whole libraries, or at least bookshelves, have been written about Shakespeare and medicine.

While I was writing my column I had an added incentive”not that I needed one”to go into any secondhand bookshop that I passed. Wanting to avoid the obvious in my column, I sought out-of-the-way works with some medical aspect. One day I came across a small book, published in 1793, with the title A Journal During a Residence in France, from the Beginning of August, to the Middle of December, 1792. To which is Added, an Account of the Most Remarkable Events that Happened at Paris from that Time to the Death of the Late King of France. The author was John Moore, MD, and so I bought the book to turn it into a column (which I never did).

“Certainly it is a common observation in the world, now more than ever, that when self-righteous political passion forms an alliance with sadism and the urge toward crime, the worst atrocities result.”

Dr. Moore, I later discovered, was not the obscure scribbler I had supposed, but in his time had been a well-known and best-selling author. Well, one cannot know everything”thank God. He was a Scottish surgeon, well-connected, who before long grew tired of the miseries and perhaps the responsibilities of medical practice (in those days the rate of success could not have been very high), and he sought refuge in a literary career, very successfully in the event”some of his books went through 21 editions in his lifetime.

His journal has the immediacy of newspaper reporting. It is written during the days following the French Revolution without the benefit of hindsight, that great and almost absolute guarantor of political wisdom. Dr. Moore is an honest, even naÃ¯ve, observer.

The beginning of the journal, for example, suggests a paradox of which he is not even aware, or on which he does not remark. He writes:

Before I was twenty-one years of age, I resided for two years at Paris. I afterwards made a tour into Flanders, and returned through France … On all those occasions, the affability, the ease and peculiar gaiety of the French nation left a very pleasing impression on my mind, and I often regretted that a people so formed for enjoying and communicating happiness, should labour under the oppression of an arbitrary government, and unequal laws.

If only, Dr. Moore continues”if only they, the French, had a British system of government, then everything could be perfect.

This is surely very curious and worthy of some reflection. The passage I have quoted might be summed up as follows: happy people, rotten government.

Of course, Dr. Moore’s observation of the French as happy might be dismissed as inaccurate; he might have omitted from his account all the miseries he saw in France, as Walter Duranty omitted scenes of famine in his reports from the Soviet Union for the New York Times in the 1930s. But I rather doubt it: and in any case I have myself observed this seeming paradox, namely that a bad government does not necessarily make for a wretched people, nor the opposite, a good government for a happy people. Of course, there is a degree or type of badness of government completely incompatible with human happiness on any large scale, but that does not resolve the paradox.

Alas, once we start to think that human existence must conform to abstract principles”of equality, justice, or whatever principle we adopt as representing the summum bonum”all other considerations are driven from our mind, and we seek that summum bonum at any cost, even the destruction of all that has hitherto lent happiness to our existence. That is why violent or radical political upheavals in the name of some abstract principle are so soon followed by nostalgia for things as they once were: reform in haste, repent at leisure. It is as if we take what gives us pleasure for granted, while fixing our minds only on what is, from the point of view of abstract principle, unjustifiable. In the modern world at any rate, we seem unable to escape this dialectic.