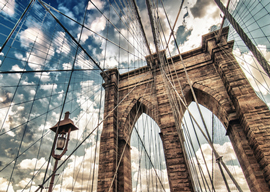 Not five months out from its launch this March, the right-leaning literary website Liberty Island recently earned a logic-impaired hate note from the fiction editor of the Washington Post himself, Ron Charles.

Charles apparently thinks he can defang the idea that the orthodox left is strangling other viewpoints out of literary discourse by ridiculing things that nobody at Liberty Island has in fact said.

He quotes a National Review piece in which Adam Bellow, Liberty Island’s CEO and president, writes:

“Conservatives should remember that mainstream popular culture is still largely driven by books. … Fiction therefore is and will remain the beating heart of the new counterculture.”

And I swear, this disconnected attempt at a lampoon was Charles’s retort:

So true. Everybody knows that Brooklyn novelists pull the strings in America. Jonathan Safran Foer pretty much single-handedly pushed Obamacare through the Senate.

Note the crafty change of subject: neither “culture” nor “counterculture” had the ability to put bills through the U.S. legislature the last time I took a civics class. But privileged and ideologically correct NYC novelists and editors do pull the strings in book culture, which is what Bellow is talking about”the very subject Charles is disingenuously avoiding.

“Within living memory, writers of various philosophical backgrounds used to be accepted as part of the general culture, and fiction was fiction: a story, not a morality play.”

Liberty Island has collected links to a flurry of similar, groupthink-approved dismissals of the need for literary alternatives”several of which, ironically, ridicule out of hand the idea that groupthink-approved dismissal of literary alternatives exists. Bellow is himself an editor (and Saul’s son), leading several in the crowd to caw that he is the establishment; never mind that he founded the site not to promote his own writing but that of the neglected authors he seeks out.

David Bernstein, Bellow’s partner at Liberty Island, despairs of reasoning with the intellectual bankruptcy that results when people dehumanize their ideological foes: “The key,” he tells me, “is to go around these gatekeepers and speak with people directly. That’s where fiction is such a critical tool”almost everyone loves a great story, no matter how you feel about the underlying politics.”

Great stories: this is where a couple of those snide swipes touch on a viable point, or what would have been one a generation ago. If the culture wars were being fought even a tad less bitterly, Liberty Island would be a bad idea, aesthetically speaking.

I get no joy from fiction that’s mangled by a political preoccupation”or by any ax the author can”t quit grinding. Great stories examine a human milieu or endeavor in all of its flawed, glorious, and preposterous facets, not through the single lens the author’s got clutched in his white-knuckled grip.

On the other hand, one’s worldview inevitably flavors one’s writing. Within living memory, writers of various philosophical backgrounds used to be accepted as part of the general culture, and fiction was fiction: a story, not a morality play.

But now the literary establishment rewards only stories that do grind an approved ax, and you only get two choices: a thick left-handled one, or a blander, subtler Iowa-school model with a CIA-approved bourgeois realist blade. (No jokes about my tinfoil hat till you”ve clicked on that link.) If your thinking is wrong, you can self-publish on Amazon till you”re blue in the face”but good luck getting a mention in the New York Review of Books, or even the Onion. They will be none the sadder if you drown in obscurity.

And if you think you can tailor your work to fit the “general culture,” there’s no such thing left to appeal to. As Bernstein says, “Books are following the general trend of other types of media; audiences are shunted into silos where they basically don’t see content that is meant for a different demographic. Liberals and conservatives don’t see the same news, or read the same books; Millennials and Boomers don’t watch the same TV shows, or even the same channels; black audiences and white audiences don’t even go to see the same movies. … There is no longer a common shared language through which we can all talk about American culture. It makes understanding between groups very difficult.”

It also makes things difficult for publishers and authors, who must settle for catering to their silos, or else face the nobler and insanely failure-prone task of rebuilding a general discourse.

“For right now,” says Bernstein, “we’re happy building awareness in the conservative and libertarian worlds, helping out struggling authors in that world and exposing them to like-minded audiences.” The website is meant to serve as a hub, salon, and branding aid for authors who are otherwise relegated to the anonymous soup of self-publishing.