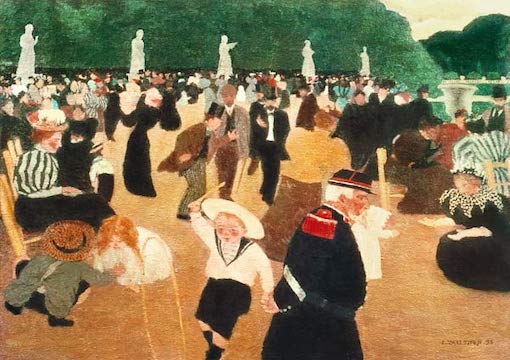 Now that academics have abandoned BC (Before Christ) for BCE (Before the Common Era), though without explaining for whom or to what the Era is Common, the initials BC are available again for use, and I should suggest that they be taken to stand for Before COVID. After all, the virus, or our reaction to it, really has caused a fracture in our lives, as great in its way as that caused to people’s lives by the First World War. Will things ever be the same again?

When I think of life BC, though it was not very long ago by the standards of history, let alone those of geology, I think of it as decisively past, as irredeemably past as, say, the Roman Empire or the Middle Ages. I also think of Talleyrand’s remark, that no one who had not tasted life under the ancient regime knew the sweetness of existence. (He wasn’t talking of the peasantry, of course, but the idea of Talleyrand as a peasant is ridiculous.) Will it be possible for people in the future to say that no one who had not tasted life BC could know the sweetness of existence?

And shall we ever recover the simple, unselfconscious pleasures that were ours in that very ancient era, BC? It is too early to say whether alarmism will triumph over amnesia, and for how long. Most people seem to think that normality, that is to say what normality once was, will return only very slowly, if it returns at all.

One’s perspective on time changes with age: Five years has once again become a long time for me, though not for the same reason that it was long when I was young.

When I was young, time passed slowly and five years seemed an eternity. Even at the age of 24, I found it difficult to say what I should be doing in six months, so long ahead did it seem. Now once again five years seems to me a long time, but for a very different reason: Time passes quickly and I haven’t much of it left. People I knew who at my age were perfectly healthy were dead within five years. A slow return to normality might be too late for me.

“Shall we ever recover the simple, unselfconscious pleasures that were ours in that very ancient era?”

Shall I, for the rest of my life, continue to see my fellow beings not as potential interlocutors, acquaintances, friends, but as bearers of a deadly pestilence that could lead me down the primrose path to the ventilator? I imagine that I would prefer death to that, but of course one does not really know how one would react to a situation until one is in it. That is why the concept of the living will is dubious.

One of my pleasures BC, though I am not sure I can call it a simple pleasure without being rather coy or disingenuous, was to attend art exhibitions. I know that exhibitions have started up again, at least in some capitals, but somehow booking in advance, having your temperature taken at the entrance, wearing a mask, and keeping a distance of 1.5 meters at least from anyone else, keeping a kind of yardstick in one’s mind at all times, rather takes the pleasure out of it, although—as compensation, perhaps—the vast crowds that once made the quiet contemplation of a picture impossible, so that one had to glimpse it, if one was lucky, through a flurry of legs and arms and torsos, now cannot gather.

While on the subject of compensations wrought by the COVID, there is also to be mentioned the disappearance for a time of Greta Thunberg from the newspapers and other media. When people speak of the Second Wave, it is of her that I think: Will there be a second wave of Greta Thunberg? I wonder what odds the bookmakers give on this important question.

One of the last exhibitions I attended in the days of innocence, when strangers, and even friends and relations, were not yet heralds or harbingers of one’s death, was at the Royal Academy in London. It was of the Swiss artist Félix Vallotton, who is not as famous as he deserves or ought to be (one sign of this is that my spellchecker underlines his name in red as being unknown to it, whereas it recognizes the names of many—in my opinion lesser—artists).

Perhaps one of the reasons that he is not recognized is that he was so extravagantly gifted that he joined no artistic movement and made several different styles his own, excelling in all. He mastered the art of the evocation of a great deal with very economical means (it is much easier to evoke nothing with florid overloading). When he first went to Paris from his native Switzerland, he frequented radical anarchist circles and produced astonishing woodcuts of Parisian life during the belle epoque. Later, he married into money and became less radical, but he did not settle into the kind of complacency that saps originality.

His severely black-and-white woodcuts are astonishing. In The Murder, for example, we see a man in what is presumably evening dress, his head hidden by the headboard of a bed in which a woman is lying (we see only her arm trying to defend herself) in a middle-class bedroom, about to strike her with a knife as he leans over her. We infer that this is denouement of jealousy, for jealousy is the only passion that could have produced such a scene.

In The Execution, we see a man about to be executed being pushed toward the guillotine (whose presence is all the more terrifying for not being seen). The man, who is leaning backwards in a feeble attempt to delay matters, is terrified as he is pushed forward, his terror signified by the white blankness of his face. There could be no more eloquent testimony to the horror of execution.

The Anarchist is as ambiguous as life itself. In a cobbled Parisian street, we see an angry-looking young man, obviously of poetic, artistic, or intellectual bent, being arrested—the rough hands of gendarmes upon his shoulder—while two simian or brutish-looking policemen, exactly as Black Lives Matter would have us think of all the police, look on.

Is the arrested man innocent or guilty? Is he a dreamer or a real and dangerous arsonist (he looks a bit like Rimbaud)? We cannot tell. Violent anarchism existed at the time, as well as police repression of it. The president, Sadi Carnot, was to be stabbed to death two years later by an anarchist. The anarchists claimed that they were reacting to injustice, the police that they were upholding order. One has a sense of history repeating itself.

Except, of course, that our present troubles will find no Félix Vallotton.