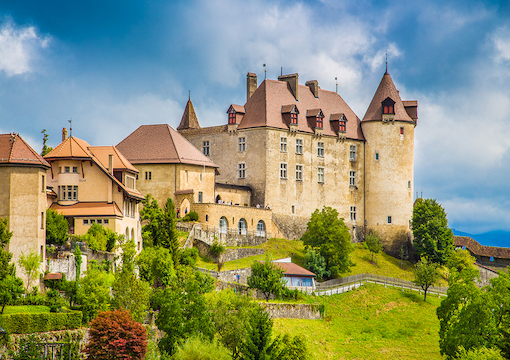 GSTAAD—It feels like a sepia-tinged melodrama, one directed by the great schlock-master Sam Wood. Driving up the winding valleys through the 17th-century villages and the Castle of Gruyères on one’s right, the heartbeat quickened as Gstaad beckoned in the distance. It meant beautiful women, parties galore, challenging snow-covered slopes to swish down on, and a friendly atmosphere among the lucky few who knew about the place. All that has gone down the drain, except for the prices of everything, which have gone through the roof. It’s called progress. I used to be able to identify the mood of a time, especially here in Gstaad, but no longer. For starters, there is no more snow from upstairs, only man-made white stuff. The last February without any snow whatsoever was in 1964, and I spent it hitting tennis balls with Irwin Shaw on the Palace hotel’s outdoor courts. Nobody talked about climate change back then, and those who did were as wrong as these modern maniacs trying to shove it down our throats nowadays. One such Extinction Rebellion asshole who drives a Porsche tried to collar me the other day, and he got a somewhat rude response: “Talk to the Chinese, and tell the African Bushmen to stop burning wood, and the Markles to offset their carbon footprint by staying put in Hollywood,” I said. “I use a sailboat, a mini, and walk everywhere, so shut up.”

From my chalet high above on the Wispile there is green all around me, with the white stuff far up and away, on the glaciers in the distance. Man-made paths of snow have the suckers going up and down the ski lifts like robots, “après-skiing” being the operative word where sport is concerned. Still, there are those like my own son who insist that there is snow and good skiing, except that particular venue changes quite a lot—daily, in fact. The only good news about this is that I will have to give up skiing in the near future, and the lack of the white stuff makes it easier.

“The way of Bushido, at least to some of us, remains a code of moral principle.”

The lack of snow was offset by karate camp, with the arrival of my karate sensei Richard Amos and Ben, a tough member of the Swiss team. Implicit in karate is a sense of personal dignity, once characteristic of the samurai, even that having given way nowadays to American-style commercialism. But the way of Bushido, at least to some of us, remains a code of moral principle. Richard Sensei, Ben, and I went at it hard, but then I noticed they were cheating, taking it easy on the old boy. I truly felt like quitting. But it is the way of Bushido—one does not attack old men. Still, a few bruises make it easy to fool oneself, and I celebrated the finish of the three-day camp with one bottle of vodka all to myself.

Throughout these 55 years of karate, especially before sessions that require hand-to-hand fighting, I inspire myself by reading about real combat, as in James Holland’s brilliant Normandy ’44. This time my inspiration was panzer ace Michael Wittmann, feted throughout the Reich and awarded the Knight’s Cross by Hitler himself for his one-man shooting spree of an entire troop of three Cromwell tanks and one Sherman in a matter of minutes along with a number of half-tracks, trucks, and carriers. (Wittmann was to die in his tank in the closing days of the battle.) That is when I came to the part about my wife’s uncle, a battalion commander in the Panzer-Lehr-Regiment, “the urbane and aristocratic Major Prince Wilhelm von Schoenburg-Waldenburg.” Eight Prince Schoenburgs were killed in action in World War II, seven at the Russian front, Wilhelm while counterattacking in Normandy and taking a direct hit in the turret of his panzer and dying instantly. The Nazis made sure nobles were in the thick of the fighting, and the extremely good-looking Wilhelm was all of 25 years of age.

And now for the good news: The group of Spectator readers who came up to Gstaad for lunch and a short speech by yours truly turned out to be probably the nicest bunch of men and women I’ve met in a hell of a long while. Even the Anglophobe Alexandra, my wife, has become an instant Anglophile because of them. There were about forty, and what struck me was the fact they were not a silly, jolly bunch, but serious men and women who had obviously reached the top of their professions such as law, the academy, and business. Yet they were a happy group who knew more about The Spectator than yours truly and had very interesting things to say during the lunch. Not a single bore among them, most likely a first ever here in Gstaad.

My plan was to cover my 62 years in Gstaad as compared with the 43 years as a Spectator columnist, and how Gstaad has gone to the dogs, whereas the Speccie has gone from strength to strength. It was a good premise, but I didn’t do it justice because I couldn’t go full-out. Anyway, my visitors were happy to be in the sun, and they even thought to bring me a bottle of the great Lagavulin scotch whiskey, “your sainted editor’s favorite,” as my friend Michael put it. Next week we at The Spectator will have a surprise for you, dear Takimag readers.