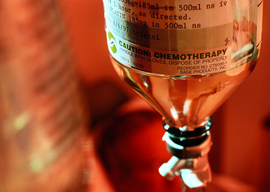 I’ll admit it: I was apprehensive about the chemo. Some decades ago a female relative of mine”not long married, infant daughter”was diagnosed with cancer and subjected to the treatments of the time, both radiology and chemotherapy. The results were appalling. She lost her hair; her face and body shape changed horribly; she became immobile. The little infant daughter couldn’t understand what was happening to her mommy, and no one could explain to her. When the poor woman died at last, everyone in the family murmured, “Thank God!” to each other, usually followed by something like, “If I get what she had, please please someone put a pillow over my face.”

These things are much better calibrated now. I doubt anyone’s ever going to enjoy chemo, but it’s a long way from the horror show of that childhood memory. What happens is, you go to a 20-by-20-foot room with Barcaloungers set around the sides. Next to each Barcalounger is an IV stand on wheels. You sit in one of the Barcaloungers and roll up a sleeve. A nurse pierces a vein in your arm and fixes a grommet in it, with a tube leading up to the IV bag. Then you sit there for anything from two to six hours”bring a good book”while every so often the nurse comes over to change bags.

I supposed I’d emerge from the place feeling awful. But one of those IV bags had some kind of steroid in it; I forget why. The effect was that I emerged looking for a fight. I ran the twenty miles home down the expressway, pushing aside cars and trucks that tried to pass me. Arrived home, I punched my way through the house wall, and there would have been a Duke of Marlborough moment, but unfortunately my lady was not home.

“Health is one of those things that cares about you, whether or not you care about it.“

Alas, the good stuff soon wore off, and then some. The base state for a chemotherapy patient, at least for this one, is listless apathy. Everything seems to move at half-speed. Tasks I could accomplish in a couple of hours now take all morning. This isn’t particularly unpleasant, just income-diminishing for a freelancer on piecework.

Excuse me, I have to go lie down for a spell.

That’s better. The other annoyance (if it was interesting enough to get annoyed about) is that I have to be obsessive-compulsive about hygiene. Chemo kills bad cells”cells that are multiplying out of control. As well-calibrated as it is nowadays, though, it still kills a lot of good cells”in my case, white blood cells, the first line of defense against infection. I’m wide open. I wash my hands every fifteen minutes. I wear surgical masks to ride planes, trains, and subways.

It all goes against the grain. I have no interest in health and never have. The health magazines scattered around the chemo room are even less interesting than the occasional TIME or Newsweek. The videos about health shown on the widescreen TV up on the wall are snoozers. I couldn’t care less about any of it. I feel about my body the way St. Francis of Assisi felt about his when he apologized to it on his deathbed, calling it “poor donkey.” It’s only a vehicle in which to get around.

Apparently, though, health is one of those things that cares about you, whether or not you care about it.

Excuse me again, I have to go wash my hands.