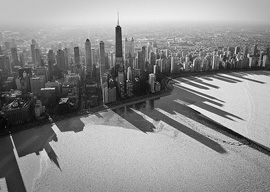 On August 31st, I extolled Clybourne Park (now playing at Chicago’s Steppenwolf Theatre), Bruce Norris’s 2011 Pulitzer Prize-winning drama about white flight in 1959 and white gentrification in 2009. That same day, in an example of life imitating arts criticism, liberal gentrifiers sent a 40-man SWAT team to smash down the door of an extended family of about 30 underclass blacks still living in Chicago’s Lincoln Park on the 1800 block of N. Sheffield Ave. (That’s right between Steppenwolf on N. Halsted and the Crate & Barrel on N. Clybourn.)

Making Norris’s cynical satire sound unrealistically genteel, authorities evicted the enormous Harris clan from the two adjacent homes they’ve owned since 1970. When Chicago Tribune columnist Mary Schmich complained about the eviction in “Family shattered after raid, home loss,” one Lincoln Park resident wrote in to explain, “People don’t pay $20,000 a year in property taxes to have neighbors like these.”

Norris cleverly sets his two acts a half-century apart in the same Near North Side house that the integrating black family in Lorraine Hansberry’s A Raisin in the Sun buys. The story of the Harris tribe answers two questions left hanging by Clybourne Park: Why were my Chicago in-laws so disastrously mistaken when they hoped in 1967 to make integration work with the hard-working, Hansberry-like blacks who had started moving in? And just how ruthlessly far will today’s liberals go to make the desirable parts of the inner city white again?

“Just how ruthlessly far will today’s liberals go to make the desirable parts of the inner city white again?”

The demolition of the notorious Cabrini-Green housing projects finally boosted the Harris clan’s southwestern corner of Lincoln Park into the home-price stratosphere, too. Zillow.com estimates that the Harris family’s two houses should be worth $1,697,000.

N. Sheffield had been one of the last streets in Lincoln Park to yuppify, for a reason I discovered in 1982 while apartment-hunting with my cousin Rob. After visiting a half-dozen small and expensive places, we toured a huge layout on N. Sheffield.

“How much?” I asked the landlady.

“You mean, $400 from each of us? That seems steep.” In the distance, I heard a sound like thunder.

I flung back the curtains and stared into the faces of passengers on the El train roaring by three feet away.