Life in the Olive Republic 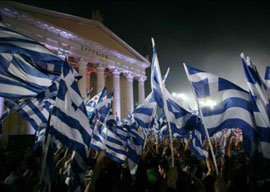 Like all proper banana republics, the Olive Republic of Greece has jailed some elected members of Parliament and charged them with criminality, as obscure and vague an accusation as hooliganism used to be when Uncle Joe Stalin was displeased with some Russian writer. Stalin used dissidents for target practice; the present gang in power in the birthplace of selective democracy simply lifts their parliamentary immunity and sticks them in jail. The last people to do this were the so-called abominable colonels back in 1967, and I say “so-called” because when they pulled their coup off on April 21, 1967, the majority of Greeks cheered.

The media did not cheer, nor did the bien pensant among Europe’s liberal elite and inside the Beltway. You know the type: ugly, feminine, intense, dandruffy, bad teeth, and always prattling about civil liberties and human rights, which in my book are licenses to oppress the law-abiding and allow criminal behavior by minorities. The colonels did eventually screw it all up, in fact very badly, but they didn”t steal and were never given a chance by the rest of Europe. President Nixon was among the few who saw the colonels as they were: pro-West, very Christian, patriotic, honest, and not at all sophisticated. Most of them died in prison for crimes they didn”t commit once the head of state, King Constantine, had sworn them in.

“Athens needs to clean up the corruption and crony capitalism that have been at the root of the country’s problems.”

Which brings me to the point of my story: The colonels were given life sentences for overthrowing a democratic system”which in reality was not as democratic as it sounded, but more or less a game of musical chairs among the well-connected. The present government in the Olive Republic is one made up from two parties, New Democracy and Pasok. These two parties have held power via musical chairs ever since their inception following the fall of the colonels in July 1974. These two parties are solely responsible for having stolen billions from EU bequests meant to be invested in the country’s infrastructure. Instead, both parties used the unlimited funds to place their own in civil sinecure jobs for life, in many cases two or three jobs simultaneously, the lucky civil servant”one in every four Greeks”making up the middle class that has emerged the last forty years. These same crooks now order six members of Parliament arrested and jailed without bothering to lift their parliamentary immunity (at least of this writing) and call the arrested MPs a threat to democracy. (Kafka, where are you now that we need you in good old Hellas?)

So the colonels overthrow a minority party ruling by royal fiat and get life sentences as a result. The ruling crooks today are sending elected officials to jail without proof because Golden Dawn is unpopular with the bien pensant and the media the world over (except if you”re Greek, poor, and defenseless). Golden Dawn members, to be sure, would not exactly be welcome in the drawing room of, say, Consuelo Vanderbilt, but what you see is what you get. They are poor, have never had a slice of the pie so generously divided between the faithful of the two parties, are regular churchgoers, and are very patriotic. They are anti-EU because they know that the vast bureaucracy that is the EU is just another con for bureaucrats in Brussels to run their lives from the comfort of their plush offices.