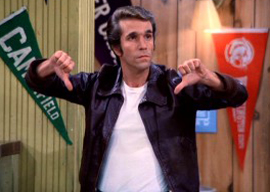 I was on a double-decker bus in Glasgow, Scotland, last week and heard two teenagers talking to each other about O. J. Simpson. “I’m, like, almost positive that he was arrested for, like, armed robbery or some shit.” A week before that, I was at a restaurant in upstate New York, where a white-haired man was telling his teenage daughters a story that ended with, “So I’m, like, WHAT?” and uproarious laughter.

That night, my wife suggested I watch a video of a friend of ours acting as if he was a teenage girl. Don’t watch it, but there’s a Brazilian guy in the video who obviously just began learning English. He starts a story with, “Uh, it was, like, at 11:30, 12 o’clock.” Soon after that, my four-year-old daughter was discussing her toys and said, “He’s, like, ‘What are you doing in my house?’”

I don’t mind when the word is used in the proper context, as in, “I like candy that tastes like peppermint.” It’s the extraneous, unnecessary, vestigial “likes” that I don’t like.

“The word is a metastasized tumor that has invaded the lexicon and won’t stop until the entire language is dead.”

I don’t like foreigners learning English littered with the word “like” as if it were so much roadside garbage. I hate hearing old men use it, and I’m disappointed the word has made it all the way to Britain, but when my daughter uses it, that’s where I draw the line. I immediately called up a sign-maker in Oregon and had him make a sign for my house that says, “You Are Entering A ‘Like’-Free Zone.” He was taken aback by the request and said, “You live around a lot of Valley Girls or something?” I was so happy to hear someone say this. Finally, one human being who thinks it’s unusual to talk as if you’re a really stupid teenage girl on the phone with an even dumber teenage girl really late at night. “No,” I replied, “I live in New York City where EVERYONE says ‘like.’ Businessmen, moms, politicians, teachers, cops. It’s an epidemic.” It isn’t just New York—it’s the entire English-speaking world. People at airports, on trains, and in convention centers use the word at least half-a-dozen times per sentence and they don’t even know it. Do you? Am I the only one pulling my hair out because of this fucking word?