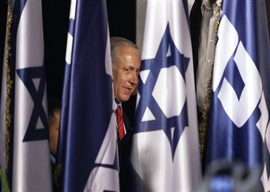 You have to love Likud, Israel’s governing party. Its politicians may not be as smooth as Labor’s grandees, but they are usually more honest. An Israeli saying that dates back to the early 1970s asserts: “The Labor Party announces one settlement and builds ten. The Likud Party announces ten settlements and builds one.”

For all its faults, Labor has done more and remains capable of doing more in the future [in expanding Jewish settlements] than Likud with all of its doing. We have never talked about Jerusalem. We have just made a “fait accompli.” It was we who built the suburbs in [the annexed part of] Jerusalem. The Americans didn”t say a word, because we built these suburbs cleverly.

“Annexation of specific areas would put a limit to Israeli expansion by defining Israel’s border with Palestine. Once the areas are annexed, how can Israel steal more land?”

From the Oslo Accords” signing in September 1993 until June 1999, under Rabin and then his Labor successor Shimon Peres, Israel expropriated 54,400 acres of Palestinian land and doubled the number of settlers in the territories. Likud’s Benjamin Netanyahu, who became prime minister in 1996, did not contribute much to that total. From 1999 to 2000, under Labor’s Ehud Barack, the settler population grew from 177,000 to 203,000″far outstripping growth under Netanyahu. Labor’s reticence to tell the outside world about its achievements is matched by Likud’s candor in bragging about the continuing theft of land. So to know what is happening, it is usually better to listen to Likud.

The Palestinians, unable to prevent Israel from seizing the land on which its people live, have been seeking a variety of means out of their predicament. They have tried terror, and it failed. They have tried negotiations; they, too, failed. The Israeli army crushes their peaceful demonstrations (of which there have been thousands since 1967) in the most violent manner. Colonel Gaddafi could learn much about crowd control from Israel’s security forces. The Palestinians are now attempting to bring the pressure of world public opinion on Israel by declaring an independent state in the West Bank and Gaza.

Likud and Knesset member Danny Danon, in a New York Times op-ed titled “Making the Land of Israel Whole,” proposes that Israel “should annex the Jewish communities of the West Bank….” It is an interesting suggestion. Like so many fantastic ideas from what most sane Israelis used to regard as the lunatic fringe, it has every chance of becoming policy.