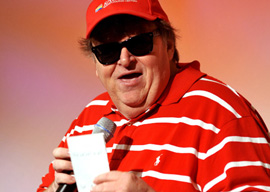 It’s no coincidence that both Karl Marx and Friedrich Engels were born into cozy bourgeois households nestled high above the dirty claws of proletarian squalor. Neither is it a coincidence that the loudest voices squalling these days against “the rich” and “the powerful” are themselves comically wealthy and unduly influential. It’s not coincidental at all. But it’s intensely weird.

One of the modern era’s biggest Big Lies”the size of Rosie O”Donnell if she were a Macy’s Parade blimp or Oprah Winfrey’s buttocks if they were carved into Mount Rushmore”is that the political “right” represents only the rich, whereas the “left” protects the interests of the poor, the whole poor, and nothing but the poor. The most relentless proponents of this myth, at least from my relentless observations, are extremely well-to-do leftists.

Being very rich and pretending you speak for the very poor”all while either openly mocking or silently ignoring everyone in between”is a tradition that spans continents and centuries. Just as I presume every culture on Earth has a euphemism for “blowjob,” it seems as if they all have terms to describe what are known in America as “limousine liberals,” or as Tom Wolfe famously dubbed them, the purveyors of “radical chic.” In England such types are known as the “chattering classes,” “parlor pinks,” and “champagne socialists” “a term the Swiss also use. The Irish label them “smoked-salmon socialists.” Swedes tag them as the “red wine left.” Aussies call them “chardonnay socialists,” “latte liberals,” and “salon communists.” France, Peru, and Portugal all have terms that translate to “caviar left.” Poles refer to them as “coffee shop revolutionaries.” The Japanese equivalent is Botchan Sayoku, which translates to something along the lines of “stridently leftist schmuck from well-heeled family who is tragically clueless regarding how the world actually operates.”

“Modern charity begins in Malibu and steps on the necks of everyone in flyover country while reaching across the ocean to pose for a photo with a malnourished child in a small African village.”

In the mid-1800s, such personages as Harriet Beecher Stowe (wracked with moral anguish about Southern slavery while seemingly unperturbed about merciless factory conditions in her New England backyard) and the Duchess of Sutherland (who likewise agonized about faraway American slavery even though she”d forcibly evicted an estimated 15,000 Scottish peasants from their own land) epitomized that era’s version of limousine liberalism. In 1852’s Bleak House, Charles Dickens referred to the “rapacious benevolence” and “telescopic philanthropy” of the “charitable people…who did a little and made a great deal of noise.” In 1855, Russian author Alexander Herzen wrote that while real human beings were “dying of cold and hunger,” social theorists sat far away in heated rooms, “chatting about socialism “over pastry and champagne.”” An 1865 cartoon published in Punch shows Lady Britannia peering through a telescope at faraway lands while ignoring homeless British children tugging at her feet.

The tradition has persisted into the 21st century. Modern charity begins in Malibu and steps on the necks of everyone in flyover country while reaching across the ocean to pose for a photo with a malnourished child in a small African village.

America’s modern liberal elites snort and scoff at the very notion that such a thing as a modern American liberal elite exists, so let’s set the matter straight as if we were emergency-room physicians forcibly snapping a broken nose back into place. Seven of the ten wealthiest members of Congress are Democrats. Barack Obama won eight of America’s ten wealthiest counties in 2008, which correlates with the fact that campaign contributions from America’s twenty wealthiest zip codes were shaded an absurdly bluish hue that year. Only wealthy liberal elitists, possibly due to psychological complexes involving moralistic status jockeying with other elites and deep-rooted guilt for enjoying the sorts of privileges they deem fundamentally unfair, would deny their own existence.

And yet they do. Persistently. Loudly. Ridiculously.

Al Gore”who leaves a Godzilla-sized carbon footprint whenever he jets around the globe to save the environment”spent eight years as vice president and is rumored to be worth hundreds of millions, yet he campaigned with a straight face in 2000 as representing “the people” in a struggle of “the people versus the powerful.” Michael Moore barks, burps, and bellows about how “the people” and “the unions” need to stick it to “the capitalists” and “the racists,” stances which would smell more authentic if he didn”t outsource his post-production film work to Canada (where he can avoid union wages), have an estimated net worth of $50 million, and live in a cloistered lakefront community that’s about a half-percent black.