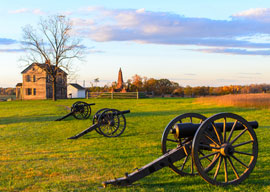 Until that day, though, if the federal government wants to build a fence that keeps the United States safe from the dangers of lower wages and poverty and their attendant ills “ and the all-round fruitcakery of the right-wing white South “ it should build that fence from Norfolk to Dallas. There’s nothing wrong with a fence, so long as you put it in the right place.

This is another manifestation of what John Derbyshire calls the Cold Civil War: “good old American sectionalism“two big groups of white people who can”t stand the sight of each other.”

One reason that America’s internal animosities have become so virulent is that since the Soviet Empire’s collapse two dozen years ago, we lack worthy external foes.

A rare contribution of the Muslim world to intellectual life was made by the Tunisian philosopher Ibn Khaldun in the 14th century. He developed a theory of the rise and decline of group loyalty. An impoverished tribe out on the fringe of the Sahara would develop an esprit de corps allowing it to conquer the coast’s rich but decadent civilization. Over a few generations of soft living, the new ruling clans would lose their asabiyyah and turn to scheming against each other for petty advantages, only to be conquered by a cohesive new tribe out of the wasteland.

“Not only is it dumb to refight the Civil War, we didn”t really need to fight it in the first place.”

But there are few threats left. These days, America has to actively import its enemies, such as the Tsarnaev Brothers, who were given valuable refugee status despite being on the winning side back home in Chechnya.

A general lesson of history is that it’s a bad idea to resent your fellow countrymen so much that you want to import some foreigners to put them in their place.

For instance, this didn”t really work out for the 12th-century Irish warlord who thought it would be a great idea to get the upper hand in an internecine struggle by inviting some Norman English knights over to help him. These were Vikings who had conquered a chunk of France and then all of England”in other words, some seriously scary guys. It took until 1922 merely to get their descendants to give back southern Ireland.

As the Derb says of attitudes like Meyerson’s, “We are eternally re-fighting the Civil War.”

And that’s a dumb thing to do, because, amazing as it seems today, we once got over it. Granted, hard feelings over the Recent Unpleasantness endured long enough that it came as a surprise to many observers in 1898 when Southerners not only didn”t sit out Republican William McKinley’s Spanish-American War, they volunteered enthusiastically.

Ken Burns’s deservedly famous documentary The Civil War concludes with 1938 newsreel footage of the 75th-anniversary reunion at Gettysburg. The scene of a dozen or so surviving nonagenarian veterans in blue heartily shaking hands with a dozen wizened vets in grey is tremendously moving.

In fact, not only is it dumb to refight the Civil War, we didn”t really need to fight it in the first place.

The arrogance of the South Carolinians and their followers in the six Deep South cotton states would not have plunged the nation into a war that killed 750,000 Americans if not for Abraham Lincoln’s Hicksville unpreparedness. Indeed, Lincoln’s worldly Secretary of State William Seward came up with a brilliant plan to avert civil war at the last moment, only to have it shunned by a jealous Lincoln.

The 16th president has been so sanctified that we”re not supposed to notice that Lincoln’s insularity left him unready to lead during the great crisis of secession in 1860-1861. Conversely, Lincoln’s detractors like to portray him as a power-mad dictator. Yet his actions during the crucial months in which the Civil War might have been averted are most redolent of a crafty small-town lawyer who was badly in over his head in his new role. Lincoln worked hard and learned fast, but by the time he was ready for his job, the worst catastrophe in American history was underway.

In early October 1860, the experienced Democratic candidate Stephen Douglas conceded to his secretary, “Mr. Lincoln is the next President. We must try to save the Union. I will go South.”

But Lincoln took few steps to ready himself for this task. His main response to his election in November 1860 was to hire a second secretary to help answer his increased mail from politicians seeking patronage.

During the interregnum, Lincoln kicked around the notion of maybe adding one Southerner to the Cabinet, what with the secession and all, but nothing came of the idea. After Lincoln finally took the oath of office on March 4, 1861 he devoted much of his first six weeks to conscientiously interviewing the long line of Republican job-seekers that stretched out of the White House and down Pennsylvania Avenue to determine which would make the best local postmasters.

But could anything have been done to avert the Civil War?

Perhaps. A glance at a map showing the dates of secession suggests that it might have been contained at the brushfire stage.