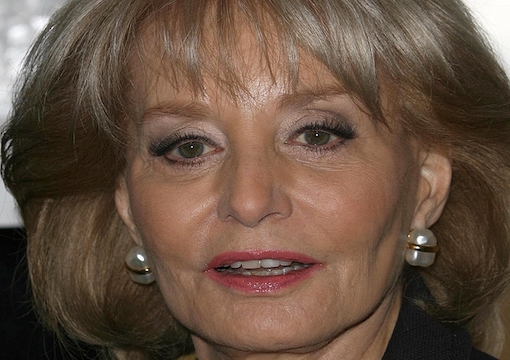 GSTAAD—I’m not usually nonplussed, but this is very strange: The memoirs of Barbara Black, the wife of my good friend Lord Black, simply do not make sense where certain people she writes about are concerned, persons whom I happen to know well. The list is not long, and I’ll start with David Graham, her third and extremely rich husband, who was the biggest bore I have ever met, and believe you me, I’ve met a few in my long life. With kindness in mind, she fails to mention what a terrific bore he was, and also the cheapest man I’ve ever come across. (He’d be dead before the credits in a cowboy film, being so slow on the draw.) He was such a rube that one time in Saint-Tropez I finally told him, “Never, but never speak to me again, I beg you. Please fuck off.” He looked askance but was too much of a bore to at least insult me back.

Okay, next: Barbara Walters. Lady Black writes how TV Babs snubbed her after the fall, but what did she expect from someone like that? Barbara Walters is so superficial she’s considered only moderately intelligent even in Palm Beach. Exactly twenty years ago, in Montreal for the Mulroney-Lapham wedding, I was in deep you-know-what. My mistress had left me for a man who looked exactly like a pig, and my darling Alexandra also was hinting that she’d had enough of my philandering. In a deep funk but in a brilliant setting and dinner jacket, I had a chat with Barbara Black and my then proprietor Conrad, who said he was sure everything would be all right once I turned on the charm. “You have to choose,” said Barbara, “other women or your wife.” “But I want both,” I said when we were interrupted by the wife. In order to change the subject Lady Black volunteered that she and Conrad were leaving with Barbara Walters for a long week to Russia. “Poor you,” stammered Alexandra, without wanting to wound. She had sat next to La Walters a couple of weeks prior, and the TV star had theatrically shown concern for Turkey, addressing the famous Turk Ahmet Ertegun. “The troubles in Yugoslavia worry me—they might spill over the border to Turkey,” said the moron. “There’s always Bulgaria in between,” said the wife.

“Barbara Walters is so superficial she’s considered only moderately intelligent even in Palm Beach. ”

Mercedes Bass: Born Mercedes Tavakoli in Iran, I knew her during the late ’60s in Geneva. Not exactly a beauty, she married a nice WASPy drunk in New York and then met Texas oil zillionaire Sid Bass. The gentle Texan Bass paid dearly to divorce his wife to marry the Iranian, leading me to write that “It was the first time ever that a man paid 250 million dollars for a used Mercedes.” The glossies in New York picked it up and called it the quip of the year, but it did not go over well with Mercedes, although Sid later told me that he found it very funny. Needless to say, she began a war against me, one I didn’t mind at all as we ran in different circles. In her memoir our Barbara describes how Mercedes snubbed Lady Black after Conrad’s trial, which I must say is as predictable as Meghan complaining about racism. What bothers me is how a woman like Barbara Black, whose brainpower is 100 times that of Mercedes Bass, can be surprised and, worse, hurt by it. Mercedes Bass has since been divorced, and at a Bagel dinner party last year made complimentary remarks to me. I did not fall for them, nor was I rude. When I got busted on July 23, 1984, and was sent to prison, I did not lose a single friend. Not one. It says a lot about Lady Black’s friends but also about her.

Assumptions of superiority among social climbers and insecure nouveaux are as common as good manners and grace are among the aristocracy. (The latter don’t assume, they know.) Lady Black should not have hung out with John Gutfreund, for example, who criticized her choice in jewelry, or Jayne Wrightsman, who told her to stop eating bread. Jayne was a nice girl working behind a counter somewhere out west when a brash oilman named Charlie Wrightsman picked her up and married her and turned her into a living museum. All Black had to do is tell Jayne that she, too, once worked behind a counter, hence her habit of picking on bread crumbs in between sales.

And now for two ladies Barbara Black felt acted different toward her after the trial, but both of whom I cannot praise enough: Nancy Kissinger and Annette de la Renta. Nancy I know very little, but she treated me like a prince when Annette brought me along to her house for her hubby’s birthday. She’s warm and kind to all alike. Annette has been a friend of Alexandra’s since preschool, is as generous as one can be, sits on the boards of the Met and other institutions, and reads as many serious books in a week as I smoke packs: five. She runs the best houses in New York and Connecticut, and feeds hungry, upper-class English people.

Conrad Black is a terrific writer-historian, as is Barbara Black. He was railroaded for some choices he made—the in-crowd will never forgive a conservative. At least now he knows who his real friends are. As does Babs.