Lock Me Up and Throw Away the Smokes 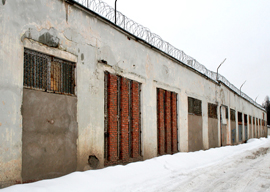 In the epilogue to Crime and Punishment, Dostoyevsky provides the reader with a harsh, swift summary of prison life’s brutalities. Penitence is painful, prolonged, and merciless, and the author”writing from his own personal experience”tells us of “the hard labor, the bad food, the shaven head” and “the thin cabbage soup with beetles floating in it.” To be incarcerated in 19th-century Russia was nearly as wretched a fate as to be entombed in a crypt. The body would decay beneath the dire weight of disease, malnutrition, and excessive toil, and there was a good chance that the mind would go with it.

But it’s not so when we jump ahead through time and geography to North America of the present day! Not so in the United States, where a California woman recently slapped a cop with the sole stated objective of getting herself arrested. The purpose behind such a seemingly self-destructive act? Etta Mae Lopez wanted to quit smoking.

A similarly creative solution to one’s health problems was devised a couple of years ago by one James Verone, a gentleman in North Carolina who, suffering from a diverse host of bodily ailments, conducted a one-dollar bank heist in the hopes that his jailers (via taxpayers, obviously) would mend him up when they locked him up. In America, prisoners receive complimentary medical treatment. (If you want, you might even get yourself a sex change.)

However related these two cases may be, they are fundamentally divided by the fact that Verone was a man driven to pathetic desperation, while Lopez was just…pathetic. Verone was old, unemployed, and uninsured. He had a strange growth on his chest, a lame foot, and chronic back problems. Although the man certainly doesn’t have the right to slip his fingers into the taxpayers’ pockets to pay for his medical treatment, I don’t know if we can blame him for making the attempt. His suffering was extreme enough that he was willing to swap his freedom for medical attention. Which is more blameworthy: a hopeless man or the stupid system he exploits?

Verone was hardly the only guy to ever try it. An ex-con with leukemia recently got himself arrested for the same reasons as Verone, while a Georgia man had more humble motives when he broke a courthouse window and made crazed threats to kill Obama”he just wanted the “sandwich and drink” that would have come with the arrest. Desperate times call for desperate measures, and seeking incarceration to avoid a worse end has likely been the decision of many a starving transient through the years.

But Etta Mae Lopez has made a mockery of this time-honored American tradition.