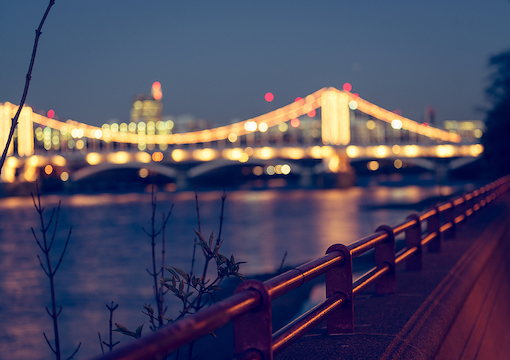 There’s a narrow stretch of Chelsea south of the King’s Road from Oakley Street to Ormond Gate that reminds me of postwar London when I first came here with my dad. Names like Margaretta Terrace, St. Loo Avenue, Alpha and Robinson Streets bring back sweet memories of youthful innocence and desire. London back then was big on rep but dead last in comfort. Much later, during the end of the ’50s, Queen’s Club held the second-biggest tennis tournament in the land and had one—one—shower in the men’s locker room. (With a dirty white curtain.) It is often said that schoolboys derive no benefit from fine architecture, and it was certainly true in my case, but what I did take in was the mood. Mood entered my consciousness very early on and it has never diminished. A shadow on a windowsill, the reflected light on a sunny balcony, all bring back intense feelings and memories of youth.

Walking around last Sunday I felt for just a moment that I was back in London and I was 15 years old. The street was deserted and dead quiet, and it reminded me of the first time I walked around Kensington in 1952. London was very English back then. My father described it as a city full of people saying “sorry” nonstop. Paris was cosmopolitan, Rome was historical, but London was uniquely English. The city had a special smell of diesel, tea, and woodburning stoves, and of tobacco. I went to a cinema in Leicester Square and everyone was smoking, mostly nonfilter ciggies and also pipes. (Those were the days.) Now the place is not only healthier and very multicultural, but I sometimes get the feeling on the King’s Road that English is the second language.

“The trouble with a long life is memory.”

The trouble with a long life is memory. Not necessarily of past loves, although they ache at times, but of places and the way things used to be: the good manners of people, the formality that reigned, and the permanence of rank in society. Most of all, memory reminds one of the energy one used to have, the urge to see it all, experience everything, and meet everyone. Every time I’m on the Cromwell Road I look at the dump of a hotel I stayed in during my first Wimbledon, where a Rolls-Royce limo would arrive each day to take players to W.19. In 1957, after Lew Hoad had repeated his previous year’s win, I took him to the Milroy, London’s premier nightclub. I used my father’s name to get in. Not a single person recognized him. In 1962, after a polo match in Paris, Raine Dartmouth, as Princess Di’s stepmother-to-be was then, went bananas for Carlos Miguens, my Argentine teammate, and invited him to London, all expenses paid. “I cannot go without my team,” said Carlos, and she had all four of us at 40 Hill Street for a grand dinner and weekend. And then there was Aspinall’s private chemmy game where Lord Derby won something like 200,000 pounds and Aspers had to invent a death in order to stop the game. I was by far the youngest punter and went down for 20,000, Lucan for 12,000, and Bill Sterling, of SAS fame, took the brunt. Do not try to figure out what those sums would mean today because you will turn commie on the spot.

This time around things are different. My London week began with a dinner for Conrad and Barbara Black given by Mark Lloyd and Anthony Bingham, in a great private room at Clarke’s. I call Conrad “Google” because he knows everything and writes terrific political columns. Babs is still a bit shell-shocked after what happened to her hubby. I tried to tell her that unscrupulous, money-hungry American lawyers are nothing new, and they went after Conrad because of his conservative politics and nothing else. It’s gone with the wind, as they say down south, but Conrad did not deserve any of it.

A wonderful dinner chez the Bismarcks followed a private view of Jolyon Fenwick’s and Liza Campbell’s exhibition of paintings, Liza’s images were extremely enigmatic, Jolyon’s dragonflies very beautiful. A long time ago I lent a girlfriend my London flat while I was in the Bagel. Soon after my return I noticed Jolyon wearing ties and clothes that seemed awfully familiar. They were mine. I often wondered how he got them, but I forgot to ask him about it. This was the bad news, the good being I ran into good friends like Christopher and Mardi Gilmour and caught up.

Later in the week things heated up with Dame Joan Collins and Will Moore, Charles’ son, the launch of Algy Cluff’s fourth volume of memoirs—foreword by the greatest Greek writer since Homer—and the greatest dinner EVER, chez Harry and Tessa Fane. Robin Birley sat between the two prettiest women since Ava Gardner and Betty Grable, Serena Bute and Sophie Fane, and yours truly between mother Tessa and daughter Sophie. Oh yes, the mother of my children was also there, and in view of our approaching fiftieth anniversary I had bought her a beautiful ring that only Harry Fane could provide. It’s only fair after she’s put up with my shenanigans for fifty long ones. Then I got on the plane and now I’m back in the crappy Bagel.