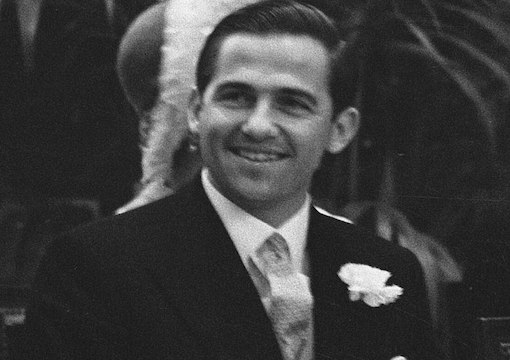 King of the Hellenes, Constantine II

Shot in the once upon a time city of dreams, now of nightmares, the sweeping solipsism expressed made paranoia a kind of totalizing faith. Behind the nauseating self-promotion a so-called prince and his Hollywood moll hogged the headlines. Far, far east from there lay a dead man, one who had absolutely nothing in common with the self-absorbed, egoistic, and narcissistic Englishman; to the contrary, King Constantine II went to meet his maker the same way he had lived his 82 years: uncomplaining, dignified, and deserving of much more than he ever received from his people.

I write this with a heavy heart because I’ve been a friend of the dead king since my youth, and the enduring friendship lasted despite my having written favorably about the colonels, the very ones who caused him to lose his throne. King Constantine’s cannot have been a happy life after the loss of his throne, yet there never was a hint of self-pity or criticism of his enemies. This I can attest to, having lunched, dined, and spent so much leisure time with him. Even during the Andreas Papandreou-inspired vengeful inquisition against the Greek monarchy, I could never get him to agree that Andreas was a rotten and corrupt demagogue. Whenever I would fly off the handle about the radical left and Andreas, he’d give me a rueful smile and say things like “Politics make for strange behavior.”

As every Greek of my generation knows, Constantine became king at age 23. He was handsome, athletic, and Greece’s first postwar gold-medal winner in the 1960 Rome Olympics. He was immensely popular, his zest for living endearing him to hot-blooded Greeks. And when he married the most beautiful young Danish princess, Anne Marie, the sight of the old man of Greek politics, 76-year-old Premier George Papandreou, walking arm in arm with the radiant young couple occasioned genuine rejoicing. It was not to last.

“King Constantine’s cannot have been a happy life after the loss of his throne, yet there never was a hint of self-pity or criticism of his enemies.”

Readers of ancient Greek history will not miss the resemblance between the tragic heroes of classical times and the leading figures of the Papandreou (father) period. As the story unfolds one cannot help but notice the flaws in individual characters that eventually led to destruction. But, unlike the classical pattern, the downfall of these modern heroes was to be almost immediate. Papandreou was to be arrested before his tenure was up, and a total split within his party would occur after only eighteen months. The young king would be exiled in less than three years.

Greek governments continued to hassle and badmouth the King in exile, and Andreas Papandreou, who came to power sometime after the death of his father, even went as far as to forbid the King and his family entry to their birthplace while expropriating houses and land holdings without compensation, real estate that was paid for by the King’s forefathers and not by a grateful nation. I saw a lot of the King during that period, and attacked Andreas and his crony crooks in my then various columns, but Constantine told me not to get personal. It was hard to digest how this man could turn the other cheek under such incivilities and lies expounded by lefty politicians and newspapers. Once he was allowed to return as a private citizen, his joy and love for the country were such that he actually discouraged me from attacking the crooks of the left.

He never struck me as entitled, nor did he ever claim victimhood like the reddish English “martyr.” Constantine presided at the party I gave for my 70th birthday in London, and I attended the dinner for his 70th in Crown Prince Pavlos’ beautiful garden in London. Queen Elizabeth was present. We sat up late that night reminiscing and telling old jokes. The King, Aleko Goulandris, and I for years would meet each 31st of December for a long champagne lunch in Gstaad’s oldest restaurant, the Rössi. The lunch would last until it got dark. The King never got drunk; Aleko and I did. Now both of my luncheon companions are gone, and I’ve sure missed them these past couple of years.

And leave it to the Greek left to hit below the belt. Constantine was head of state for nine years, and if anything he deserved a state funeral. As the best Greek royal watcher asked on national television, “Was he or wasn’t he head of state?” “Yes, but…” was the answer by newsmen. It reminded me of the Stalinist trick that eliminated those out of favor from pictures taken long before. The truth is the Greeks in power now are cowardly and fear the left that has always been anti-royal, as well it should be. It was Constantine’s uncle, King George II, along with his father Pavlos and mother Frederika, who inspired the nation to fight and drive the commie guerrillas back to communist utopias from whence they came. The left has never forgiven or forgotten, and the King’s reluctant swearing-in of the colonels—in order not to have blood spilled among the armed forces—was used as an excuse to hound the poor man even after his death.

Never mind, the Greek-Danish royal House makes the Hanover one seem rather nouveau, and the pretender to the throne, Pavlos, is as good as it gets among royals. Personally, it’s been the worst of weeks: The King, my wonderful publisher Tom Stacey, and the great Paul Johnson, all gone. And we’re left with the Halfwit and Meghan.