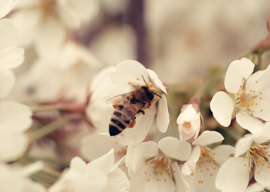 A few years ago my wife and I planted some cherry trees on our land in France, and now they are in bloom. The strange thing is that I can stand and look at the blossom, if not for hours (one must not exaggerate), at least for several minutes at a time”and repeatedly. I enjoy watching the bees at their work. I am glad to be alive.

I cannot help but think of A.E. Housman’s poem as I stand looking at the flowers, white as a wedding dress:

Loveliest of trees, the cherry now

Is hung with bloom along the bough,

And stands about the woodland ride

It is only comparatively late in my life, I am ashamed to say, that I have learned truly to appreciate the small beauties of the world, such as lichen on the bark of trees, moss and ivy growing on ancient stone walls, and so forth. Housman wrote his poem (or rather published it) when he was only 37, and put it in the mouth of a 20-year-old boy, much wiser than I:

Now, of my threescore years and ten,

Twenty will not come again,

And take from seventy springs a score,

It only leaves me fifty more.

And since to look at things in bloom

About the woodlands I will go

To see the cherry hung with snow.

So young, and yet so aware already of the fleetingness of human existence! When I was his age, I thought that my life would go on forever, and that therefore I did not have to seize the day because there would always be another day to seize. There would be time enough for the likes of the cherry blossom, if I ever deigned to notice it at all.

“It is only comparatively late in my life that I have learned truly to appreciate the small beauties of the world.”

Of course, Housman’s young man, and Housman himself, would have been much more familiar with death than was I, which would have given them a heightened awareness of how quickly life would pass. When Housman was born, in 1859, at least a quarter of children died before the age of 5, and one in six before he was 12 months old. Housman’s much-loved mother died when he was 12, and her death caused him to lose his religious belief. Death was not then the best-kept secret of life, as it is now, hidden away out of sight as a kind of social faux pas, or locked away from view as mad relatives once were, but an ever-present reality that could result from a trivial accident or seemingly minor illness. In fact, it would have taken a special kind of obtuseness not to have noticed the fragility of the human hold on life.

The transience of our existence is hardly a new subject for reflection or poetry, but poetry is not the medium in which new ideas are advanced; rather, it is the realm of “what oft was thought/But ne”er so well express”d,” as Pope, also at the age of 20, put it.

Housman was also a classical scholar of great repute, precise to the point of pedantry. Many people found his personality cold, forbidding, and arrogant; he was not very sociable and did not suffer fools, or in fact most human beings, gladly. But he had, for personal reasons, a deep vein of passionate melancholy from which sprang his poetry (and which spoke powerfully to the common man, who took it with him to the trenches of the First World War by the hundred thousand, often dying with it in his pocket).

From cherry blossoms to insects is not very far, and after I returned to the house having “gone about the woodlands,” I spent a good few minutes watching an insect”Blepharidopterus angulatus, if my identification is correct (which it might well be)”moving across a windowpane. Out of the sun it was still cool at this time of year, and insects need warmth for rapid movement. The elegant creature moved slowly, with the deliberation of an old man, and it was a perfect occasion to observe its marvelous and beautiful contrivance, the light shining through its translucent exoskeleton. In the 19th century, the photographer Eadweard Muybridge took rapid-exposure photographs of a horse running, and it was the first time in human history, after thousands of years of close association, that mankind was able to see and understand the sequence of the horse’s movements as it galloped. I was able to see, without such rapid-exposure photography, the succession of movements made by a Blepharidopterus angulatus as it made its way slowly across the windowpane.

It is difficult, watching a single insect, not to endue it with human characteristics. I found myself thinking that it suffered as it traversed the pane of glass so laboriously, whose far side it seemed so determined to reach. What did it hope to find there? Its point of arrival was almost identical to that of its departure. It may be better to travel hopefully than to arrive, but perhaps it is best not to start out in the first place.