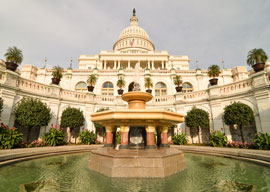 If you don”t stop something in the House of Representatives, it never is stopped. Period. Not sometimes, not oftentimes, not occasionally; but never. This applies to all legislation of all types from all constituencies.

When Obamacare passed the House in 2010 it was obvious to me the fight was over. Most serious political observers knew the same. This opinion was, however, far from widespread. As always, the neophytes outnumbered the serious people.

Colleagues of mine watching this death of the free market (at least as applied to healthcare) were more sanguine. They assured me the Supreme Court would thwart Obamacare.

There are many theories about what occurred in the judicial chambers concerning who threatened whom and what pressure was brought to bear.

“Not all bills originating from the House of Representatives become law, but nothing becomes law until it passes the House.”

How did I predict what would happen no matter the partisan philosophies or supposed make-up of the court? By reviewing how often justices have ever set aside laws expanding government intrusion into ordinary people’s economic lives. I believe it last happened around the turn of the century. (Not the recent one, but a hundred years preceding it.) There was no hope in seeking assistance from the halls of justice.

Next I was told Mitt Romney would certainly stop an Obamacare threatening to bleed industrious people dry. Yet Romney was a billionaire with experiences so far removed from his fellow men it was ludicrous to trust in his empathy. He was the principal proponent of authoritarian expansion as governor in his own state, and he never made a draft bill available that would accomplish the task.

Even so, had Mitt been elected I scarcely suppose the health of the country would have deviated much from its current prognosis.

Aside from what Romney might have done or probably wouldn’t is the greater question of man against apparatus. Did Nixon repeal portions of the Civil Rights Act that took away freedom of association and outlawed freedom of commerce? Did Reagan or Bush reinstate the ban on abortion?

Has any Republican actually delivered on their promises to deliver the voters from government? Or are the planks they run on later used to beat the party faithful over their heads?

Another aspect of this pattern is a function of longevity.

Senators, laughably referred to as “statesmen of the nation,” are sworn to six-year terms and virtually guaranteed reelection. One can proposition a policeman for sex in a public restroom in an airport where any child might innocently intrude and still not be forced to resign. Senators have almost no restraints whatsoever, leading to abuse far worse than many are aware (or most probably believe).

Supreme Court justices serve for life and usually until death. They rarely have contact with ordinary Americans outside of college graduation speeches. Although they can be impeached, this is almost unheard of, and to the extent it is technically possible their triers would be Senators.