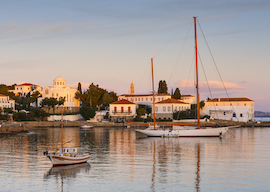 CORONIS—We are steaming on Puritan toward the private isle of Coronis for a long Pugs weekend and the boozing is easy. Sir Bob Geldof is lecturing on everything and anything and the listening is even easier. After three hours of this, and about five vodkas on the rocks in the sun, we have bypassed the island of Hydra and I feel faint. The gentle swaying of the boat, the constant blaring of Sir Bob’s lecture, and the booze are just too much. I pass out in the sun, but only for a minute or two. The Bismarcks and Hutleys and Lady Geldof prop me up and we finally drop anchor in the private paradise that means return to solid ground after a ten-day sail with the family I shan’t soon forget.

And that’s where Sir Bob truly hits his stride. We’ve been arguing nonstop about Boris and Brexit, and Bob cunningly had one drink while talking about the world in general with a Dutch royal, who had a few more. “If you think the E.U. is bossing you around, wait until Uncle Sam becomes your chief,” is the gist of his argument with me. “The Americans will eat you alive,” says Ireland’s gift to sesquipedalian speech. It puts me in a difficult position. I loathe Brussels and the crooks who run the E.U. Mafia, but respect Sir Bob’s honesty and brilliant argument against going at it alone. So I tack and go back to the ancients: What about the modern petulance that points out that women, slaves, and foreigners could not vote in ancient Athens, hence the direct democracy practiced was not the real thing? “What are you trying to say?” asks Bob in probably the shortest sentence ever uttered by him. So I let him have it: Nowhere in the ancient world was there such a form of government, and to those modern critics who see ancient Athenian democracy as not meeting their requirements, the ancient world—in return, I am sure—finds it incomprehensible calling democratic a government by indirect representation and lacking in formal accountability by politicians.

“I won’t say who is for what, but everyone agrees that the E.U. has turned imperialist and antidemocratic.”

As Bob contemplates a devastating retort, we are joined by yet another Pug, Crown Prince Pavlos of Greece, as nice and good-looking a man as there is. Then Sir Bob comes up with a good one: The kind of direct democracy the Athenians used can only work in small groups, not in advanced technological societies. In fact, in a town in Ghana where Bob was made an honorary chief and a man who sells secondhand clothes in Acton made their king, my Athenian system works, according to Bob. He then dismisses me as a lightweight and writes a song that all the Pugs have to sing to Roger Taylor, touring with Queen. (Yours truly opens the performance with a brief monologue written by me. The lyrics by Bob cannot be repeated.) Another guest on the island, Prince Augusto Ruffo di Calabria, is a Knight of Malta and an ambassador. His politics and mine coincide, and I count on him for support when the Irishman who saved Africa comes down on me rather hard. Prince Furstenberg, Count Bismarck, and Edward Hutley remain neutral, the latter busy trying to swim the ten miles separating our private island and where the Dutch monarchs are staying. (He’s been intercepted and returned by Dutch guards twice.)

Otherwise, everything’s hunky-dory. We’re up early and swimming on a seafront protected by nets far out, the island a haven of green all planted by our hostess, who should be given an ecological prize for turning a rock into the most beautiful and verdant island in the whole Mediterranean. And it’s not all fun and games. We also discuss what a tragedy the widespread loss of concern for the truth is, and the degradation of language. I won’t say who is for what, but everyone agrees that the E.U. has turned imperialist and antidemocratic. Even Sir Bob admits that Brexit, whether it happens or not, has concentrated the minds of those lying bureaucrats in Brussels.

Bringing the administrative state under democratic control was Boris’ first mission. Now it’s up to Brussels to put politics aside and make economics the first agenda. Don’t hold your breath. The mainstream media is against it. It talks nonstop about justice and compassion and fairness, and what it does is encourage envy, repression, and revenge. The center-right has been outshouted and outmaneuvered. If I had my way there would be a total boycott of the media, a massive cancellation of cable television services, and the creation of an alternative social media system. The left has used street actions, civil disobedience, indoctrination on campuses, and production of films, plays, and television programming to push its agenda of open borders and socialism. In America a Trump baseball cap will get you beaten up. In London, a Boris T-shirt, ditto. It’s time to wake up and react.

Mind you, I’ve had such a good time—first on the boat with my family, then on Coronis with all my closest friends—that a deep downer is bound to come at any time. But not to worry. Just as the gloom was setting in, great news arrived by telephone. Vivien Duffield is expecting a child, and we all cheered. Of course, it could be only gas.