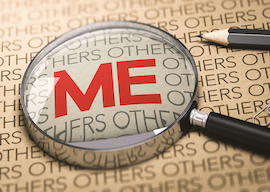 For a number of years I have been fighting a lonely one-man (or should I say one-person?) battle against self-esteem—not my own, of course, because I have just the right amount, but as the master key to human happiness.

Of the many possible human qualities, self-esteem, far from being desirable, is one of the most odious. It is much more closely related to conceit and self-importance than it is to self-respect or even self-confidence. People who talk of self-esteem do so as if it were an inalienable human right rather than something to be earned. In other words, self-esteem is like a fair trial: It doesn’t matter what you are like or what you have done, you have a right to it, at all times and in all places.

Of course, people who speak of lack of self-esteem know in their hearts that they are talking bilge. Sometimes patients would come to me and tell me that they had low self-esteem and I would tell them that at least they had one thing right. Instead of growing angry, as perhaps you might have expected, they would laugh, as if they had been caught out in an outrageous prank—which in a sense they had. As old-fashioned burglars in England used to say when caught red-handed by a policeman, “It’s a fair cop, guv.”

“Suppose,” I would ask, “someone told you that he had allowed his children to starve to death because he preferred taking crack to feeding them and that he had stolen all his aged mother’s savings, but that at least he had no problems with his self-esteem, what would you say?”

“If I were younger and more energetic, I would found a Society for the Prevention and Suppression of Self-Esteem.”

In fact, this was only just a rhetorical question because I had met many such persons, bursting with self-esteem and quite without any discernible virtues. Indeed, one of the sources of their bad character may have been their self-esteem, insofar as nothing could dent it, not even the hatred or contempt of everyone around them. If I were younger and more energetic, I would found a Society for the Prevention and Suppression of Self-Esteem.

Once you even begin to consider the question of your self-esteem, you are a lost soul; you have entered a Hampton Court maze of self-absorption, with very little chance of emergence from it, and with no hope of learning anything useful from it. To change the metaphor, the search for self-esteem is a swamp, a quicksand; or to change it yet again, it is to the soul what Émile Coué’s method, with its mantra that every day in every way you were getting better and better, was to the body. Every day, in every way, I am growing more and more conceited.

While we are at it, let us deride two ideas that are also commonly supposed to conduce to the happy life, namely those of finding your true self and authenticity.

When someone above the age of young adulthood says that he is searching for himself, it is almost always because he has been behaving badly or has had reversals in life. No one goes off in search of himself whose life is satisfactory. The assumption is that, once found, the true self will be charming, successful, and, above all, good. This is because man is born good, though—paradoxically—everywhere is bad. Finding yourself is a panacea, and you will live happily ever after.

Unfortunately, the search for the true self has a tendency to go on for years or even for decades. I used to ask my patients who said that they were in search of themselves how they would know when they had found it. The true self, after all, is not like a mislaid pair of cuff links. They said that their unhappiness would fall away when they found it, presumably like the outer mold of a casting. But they had no real idea of what a better life than the one they were leading would be like. Mostly they thought of the better life as one of luxury and more consumption, bathing in ass’ milk rather than in mere water. When I suggested that they needed to lose rather than to find themselves, they asked how one lost oneself.

“By being interested in something outside of and other than oneself,” I said.

Here the weakness of my advice became apparent to me. I have been interested in many different things in my life, usually in succession, and my library is a testimony to my tendency to serial monomania; but I have never been interested in nothing, and therefore have no idea how people develop the capacity to be interested in something (that is to say, in anything) ex nihilo, so to speak, nor do I have any recollection of how I did so myself. I suspect (though I cannot prove) that modern education, which lays emphasis on the relevance of what is taught to children’s present lives rather than, as it should be, on its irrelevance, is partly to blame for the very large numbers of people who cannot lose themselves, and therefore are left to the vagaries of entertainment provided for them under our current regime of bread and circuses. The unassuageable thirst for entertainment is both a manifestation and a symptom of a profound boredom with the world. Indeed, entertainment is also one of the greatest causes of boredom in the world, inasmuch as everyday reality can now rarely compete in raw sensation with entertainment. But since dealing with everyday reality remains a necessity for most people, it results in boredom because it is compared with entertainment. Only a deeper engagement with the world can avoid or overcome this problem.

The search for authenticity is not only futile but actively harmful, both psychologically and socially, for in general, authenticity is thought to require behavior without the restraints of normal civilized conduct, amongst which are the capacity and willingness on occasion to be hypocritical and insincere. Of course, the precise amount of hypocrisy and insincerity that one should indulge in is always a matter of judgment, but authenticity is brutish if it means saying and doing whatever one wants whenever one wants it.

Shakespeare knew that authenticity, in this sense, is for most people impossible and in all cases undesirable. The first few lines of Sonnet 138 should be enough to prove it:

When my love swears that she is made of truth,
I do believe her, though I know she lies,
That she may think me some untutored youth,
Unlearnèd in the world’s false subtleties.
Thus vainly thinking that she thinks me young,
Although she knows my days are past the best,
Simply I credit her false speaking tongue:
On both sides thus is simple truth suppressed.

Should Shakespeare abandon his love because he knows she is inauthentic in what she says? Of course not:

Away, then, with your self-esteem, your true self and your authenticity, and all the bogus desiderata of modern psychology.