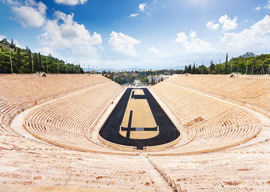 In the summer of 1992 BC (before Clinton) I was cruising in Greece with William F. Buckley and his wife, Pat, on board the boat I had just inherited from my father. It was a motor yacht and Bill, a sailing enthusiast, was restless. A discussion the night before had become heated after a friend of mine had brought up the subject of neocons using Bill’s fame and gravitas to undermine true conservatism. Out of respect for Buckley I suggested we go ask the Delphic oracle situated nearby. Everyone agreed with alacrity.

After a visit to a rather disappointingly insignificant cave, where the high priestess was supposed to inhale fumes and tell the future, I suggested we hop over to Olympia, the site of the first Olympic Games back in 776 BC (before Christ). The day was very hot but it was worth it. The stadium in Olympia is the size of a typical American high school football field. If memory serves”and I had been there many times before”the running track, which was 3,000 years old, was about fifty meters, or 150 yards, long. The marble stands held about one or two thousand people at most. The infield was commensurate with the track. I wanted to jog a bit on the sandy surface but a guard warned me off. Still, more than 3,000 years later, we stood on the site where the first-ever Games took place and where winners were crowned with a simple bay laurel wreath on their heads. (Gold, silver, and bronze medals are a modern invention.)

“Back in those good old days, a laurel was the reward, plus a statue back home and lifelong glory and honor.”

Although the ancient Games were more of a religious ceremony honoring Zeus than an athletic competition, they were limited to Greek citizens, and males only. (I don”t think the NY Times would have covered them.) The events were based on martial arts, like boxing, wrestling, and a combination of both, the deadly pankration. The first pankration winner died as his opponent surrendered. There was also archery, chariot races, running with shields and spears, and javelin throws. (No synchronized swimming, no Ping-Pong, no handball.) Back in those good old days, a laurel was the reward, plus a statue back home and lifelong glory and honor. Some pankration winners were allowed monetary rewards, especially among Spartans, whose pankration rules allowed eye gouging and biting. Even back then doctors cost money, hence the financial compensation.

The one thing I learned as a very young boy was that ancient wars stopped during the Olympics. After the modern Olympics were introduced in Athens in 1896, it was the other way round: The Games stopped for wars. I got involved with the Olympics even before I was born. My uncle, a hurdler, carried the Greek flag into the Los Angeles Memorial Coliseum in 1932, and my father was in Berlin as an 800-meter runner in the summer of 1936. Amateurism, honor, and glory were the three little words I heard ad nauseam while growing up. I can remember the first postwar Olympics as if they were yesterday. I was glued to the radio as the news came through from London. Mel Patton, who looked like a Hollywood star and was the great favorite for the title of fastest man on earth, had failed to qualify for the 100 meters back in California. Harrison Dillard, a hurdler, stepped in and won the gold in London. Patton made up for it by winning the 200 meters.

An American of Greek heritage, Bob Mathias, who looked like a Greek god, won the most grueling event of them all, the decathlon, and repeated it four years later in Helsinki. Mal Whitfield, an American Army man, won the 800 meters, and also repeated the feat in Helsinki. My uncle’s great friend Emil Zatopek won the 10,000 in London and the 5,000, 10,000, and marathon in Helsinki, an unbelievable and heroic feat, and he did it while encouraging other runners along while passing them. My favorite Games took place in Rome in 1960. My friend Tony Madigan, an Australian, lost a split decision to Cassius Clay in the semifinals, an outrage according to those present, while Armin Hary, a blond German, became the world’s fastest. There were no drugs, no bragging, no chest beating, no million-dollar contracts for appearances. People competed for glory and little else. And who can forget Billy Mills” response after winning the 10,000 meters in Tokyo 1964? Asked if he was part Indian, he said, “One-hundred percent American Indian and 110 percent U.S. Marine.”

It all came tumbling down soon after. Lucre and drugs have turned the Games into a travesty. This year the Russians got most of the blame, but Kenyans, Jamaicans, and Chinese have state-protected drug programs of their own. PC prohibits the IOC from going public. Bye-bye, Olympics.