Losing My Dream House to the Apocalypse 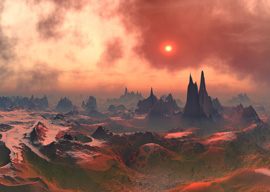 If it were not for the Apocalypse which is due any day now I would be the owner at last of a large stone farmhouse perched in the gentle foothills of the Apennines and surrounded by soothing vineyards with a spectacular view stretching to the Adriatic 25 miles away.

Sadly, my Italian wife, Carla, gave the house the thumbs down. It is in the hills, you see, and the hills, plus all mountains and islands, are destined to disappear.

I knew all this. But I thought: Hell, it’s not on top of a mountain in the Alps, only an Apennine foothill, and by God is it beautiful. Surely, God couldn”t possibly want to destroy something of such beauty, could he? I thought I could talk Carla into it. I even got an architect involved and the money ready”a mere 350,000 euro”more or less. Nothing doing. To me, it was a house to die for; to Carla it was a house in which we and our five children were doomed to die.

It pains me to recall the rush of enthusiasm I felt that day this summer when after years of searching in vain for the right place to buy at the right price I found this house just a 15-minute drive from ForlÃ¬, the irritating little provincial city where I live above my mother-in-law, down in the pianura (plains).

This house had everything. For a start it had not been “restored,” which in Italy means “ruined.” It was in fabulous condition. It also came complete with a superb barn and a delightful set of outside buildings that had once housed, among other things, the pigsty. It even had a few acres of land and a vineyard groaning with grapes and there, on an adjacent hill, a medieval watchtower framed by a few elegant pine trees” tall silhouettes.

When the modern Italian gets his hands on an old rural dwelling he either knocks it down and builds something nice and new, or else he encases it inside a nice new concrete straitjacket. Either way, he destroys its past and therefore its spirit.

I find this Italian hatred for the old and worship for the new most odd. I would have thought that Italians”who gave the world the Renaissance”would revere the past. Not a bit of it.

Here’s the explanation: The Italians were until 50 years ago nearly all peasant farmers and so regard stone farmhouses as repellent; they also confuse physical cleanliness with spiritual cleanliness. So to the Italians, old stone farmhouses reek of penury and sin. Exactly the same mindset applies to their pathologically obsessive use of the bidet.

Meanwhile, the Italians, like so many people elsewhere on the planet, prepare as best they can for the Apocalypse. There are several apocalypses on the boil. There is the Mayan one, due on December 21st, which marks the end of the 5,125-year b”ak”tun“or “Long Count””Mayan calendar. Something to do with a hitherto hidden rogue planet never seen by scientists but called Nibiru crashing into Earth, or so I gather.

Unlike my wife Carla, those who believe in this particular apocalypse think that the only safe place to be when it hits is as high up as possible. If only Carla were a follower of the Maya rather than of the Madonna.

In the French Pyrenees the mayor of Bugarach, population 179, has temporarily banned people from ascending a flat-topped mountain near his village believed to house an alien spaceship garage”Pic de Bugarach”where many had planned to go in the hope of being rescued by aliens on the 21st. The owner of a house in the village with a view of the mountain is charging £1,200 a night, and other locals are flogging mountain stones for £1.20p a gram and mountain water for £12 a bottle.