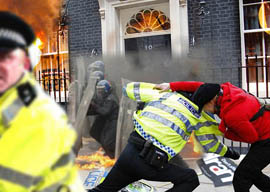 Thanks to a nifty little app put online by the Office for National Statistics over there, I see that the grumblers of those days were straining at gnats. Until 1983 the net flow was actually outward, with more Brits emigrating than there were foreigners going in for settlement. The inflow wasn’t so Third-Worldy, either: In 1975, the first year for which we are given immigrants’ “countries of last residence,” the top three were Australia, the USA, and Iceland.

Then, after straining at gnats for a few years, the Brits began swallowing camels. The big inflows started after the election of Tony Blair’s Labour government in 1997. Numbers peaked at a stupendous 591,000 in 2010 (top countries of last residence: India, Pakistan, and Poland). Last year, we are told, they declined somewhat.

As two dissident parliamentarians have pointed out”and proved, with an extraordinarily successful online petition“the British public is fed up with immigration.

“One can’t help feeling it would be character-building for our political classes if a mob were to come around and break their windows now and then.”

They were fed up in the 1960s, though, as Enoch Powell’s famous 1968 speech showed. Not only did their fed-upness achieve little; thirty years on, immigration was massively greater.

All this illustrates something I spend a lot of time pondering: the strange disconnect between what democratic populations want and what they get”or fail to get”from their politicians.

I read something that I thought might be relevant to the issue in Gordon Bowker’s recent biography of George Orwell. On page 183 we read of Orwell’s investigations among the Depression-stricken coal miners of 1930s northern England:

He remained at the tripe shop for almost two weeks, during which he attended large gatherings of “sheeplike” miners, concluding, “There is no turbulence left in England.”

If there actually was any turbulence left in England eighty years ago, there sure isn’t any today. (The Irish, bless them, are a different story.) A turbulent people would long since have dealt with the politicians who handed their country over to alien hordes by burning those politicians out of their houses, then stringing them up from lampposts.

You may say that the absence of turbulence is a good thing, that (A) turbulence is a characteristic of unhealthy, unstable polities; and that (B) it destroys property and injures”even kills”citizens.

(B) is indisputable. At my age and with my responsibilities, I’d rather turbulence not come roiling through my neighborhood.

(A) is more questionable. It may be that some turbulence now and then does no lasting harm to a nation. England was plenty turbulent from (at least) the Peasants’ Revolt of 1381 to the Reform Riots of 1831-2, a span of nearly half a millennium during which England never ceased to be England. The USA has seen turbulence aplenty: Authorities in New York City had just barely finished cleaning up from 1863’s Draft Riots when the Orange Riots of 1870-71 started up. Again, neither threatened the nation’s integrity.