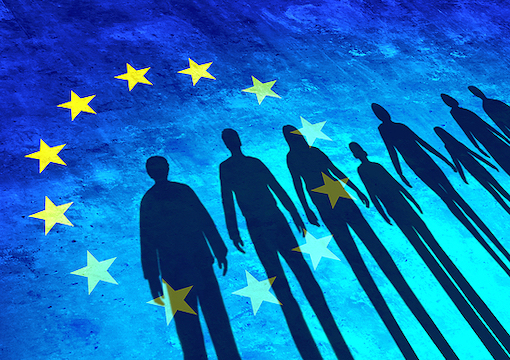 “The dog barks, the caravan moves on.” This old Turkish proverb suggests that the events of history keep rolling despite cries of complaint and censure. The hounds may yelp, but they can’t stop the progress of the caravan. In Europe, however, the sound of barking is getting louder as another caravan sets out from Turkey, and the dog may be about to bite.

After the Syrian civil war began just over a decade ago, Turkey took in many of the displaced, and Syrians became the country’s largest bloc of immigrants. In 2015, a World Bank report stated that Turkey had the world’s largest number of refugees, and that 2.25 million of them were Syrians. That figure has risen to 3.5 million since, and everything was rosy for a while:

Turkey’s response to the crisis also includes much more than the government-led legal framework and support. It also involves many individual acts of kindness at the local level, whereby Turkish families and civil societies have made donations and extended help to their new Syrian neighbors.

But that was then and this is now, when the dog has barked and the caravan is about to move on.

“The E.U. is seeing something no bully likes: the kid who stands up for himself rather than having his lunch money stolen yet again.”

Political analyst Hakim Mohammed told The New Arab magazine in September of this year that “[Turkish Prime Minister] Reccip Erdoğan…is trying to use Syrian refugees to create xenophobic feelings throughout the population, making them a scapegoat for society’s problems.”

So, while there was peaceful coexistence, the initial welcome became the Temporary Protection Regulation (TPR), which made relations between Turks and Syrians increasingly fractious. Now a combination of the TPR, interethnic violence, and Erdoğan’s long-established intention to weaponize migrants against Europe has led to the formation of the so-called “caravan of light.”

Tens of thousands of Syrians, brought together by social media, are said to be planning to walk into Europe. A fortnight ago, the Greek Minister of Protection, Takis Theodorikakos, said both that Greek security forces had turned back 1,500 migrants at the border, and that this meant that “we are effectively dealing with the Turks’ ongoing attempt to instrumentalize migrants.” If the displaced can be weaponized, Erdoğan has been stockpiling.

The caravan is likely to have three possible destinations: Sweden, Germany, and the U.K. This is not for the love of ABBA, Goethe, or cricket, but rather because these countries have the easiest and most generous welfare systems. But the U.K. is looking increasingly like the favored spot for the caravan, and for very recent reasons. Germany is teetering on the brink of a recession due to its energy predicament and the attendant threat to its powerful manufacturing base, while a significant number of Swedish voters have finally registered their disenchantment with “new Swedes” (and their vibrant culture of rape and hand grenades) by voting for Jimmie Åkesson’s Sweden Democrats, who campaigned partly on an anti-immigration ticket. Also, the caravan of light would be advised not to bother with the short and bracing excursion across the Mediterranean from Croatia to Italy, a country with a new lady in charge and a burly enforcer called Salvini. They may not be welcome.

Mass immigration is an overarching aim of the E.U., and those countries who oppose it risk having their allowance stopped. Ursula von der Leyen, lightly mustachioed and resembling a 1970s librarian, holds the unelected position of President of the European Commission. She and her cronies warned Italy before their general election that the E.U. had “the tools” to deal with an unappetizing swing to the right. The E.U. tells its member states it can have democracy in any color it wants, as long as von der Leyen’s enforcers approve, and anyone who goes against the new order will be punished. But it may be that the caravan of light arrives just when the lights are going out.

Sadly, like a gullible old couple who are enchanted by exotic photos on a holiday brochure and then dismayed to find the hotel half-built when they arrive on their dream island, this Syrian caravenserai may end up with buyer’s remorse, because European dogs are barking and may bite. What French nouvelle droitiste Guillaume Faye termed “a convergence of catastrophes” is making European economies stutter, and a lot of them lie between Turkey and Great Britain.

Slovakia is not best pleased that it acted in good faith by providing the E.U. with its energy surplus only to find this was a shell game in which it ended up buying back energy at a 400 percent markup. Serbia is being scolded for not calling Putin bad enough names. Poland faces fines for having the temerity to keep its judicial system vaguely Polish. And, of course, Viktor Orbán of Hungary has become a Marvel Comics villain for the E.U. due to his stance on family values, rejecting LGBTQ classroom voodoo, and preferring his country to stay white Hungarian.

Italy’s new and first-ever female prime minister, Georgia Meloni, according to the Western press, is channeling Mussolini; Marine Le Pen is taking great chunks of French local government; and even Spain seems to be waking up from its overlong political siesta. The E.U. is seeing something no bully likes: the kid who stands up for himself rather than having his lunch money stolen yet again. No mention from the feminists about shattering glass ceilings when it comes to Meloni and Le Pen, incidentally.

One of the great mysteries of the E.U. is how poor their actuarial analysis is. They don’t seem to see things coming in the way you would expect of a superpower manqué. They even have something called the European Systemic Risk Board, but these eggheads failed to spot what might happen if hundreds of thousands of disenfranchised Syrians were effectively expelled by Turkey, and then marched into a continent that just ran out of money and gas and is generally a day late and a dollar short.

The advance guard of the caravan of light has just arrived at the border between Hungary and Austria, and their arrival brings with it the usual pleasant advantages of vibrancy and diversity. The diversity is due to the fact that the Syrian caravan has been joined by Turks, Afghans, and Indians, the vibrancy comes with the package. Deutschkreutz is the border town of choice for these traveling players, and the mayor of the town had this to say to Austrian newspaper Kronen Zeitung:

“The situation is already unbearable. Women and families no longer dare to leave their homes in the evening.”

Some of the migrants are arrested, some evade capture and simply disappear, a skill they will want to hone as it will serve them well should they reach the United Kingdom, where this is a common occurrence on the beaches of Kent. Catch and release is fine if you are a sports fisherman after sailfish, a little riskier if you are dealing with nameless and stateless Muslims lacking any documentation and possibly hailing from ISIS country.

As with metaphors, proverbs can be extended. The dog may well bark, and the caravan move on nonetheless. It should be remembered, however, that the dog does not bark to pass the time but also to wake its owner, who may have a more robust way of dealing with a caravan on his property than just making a lot of noise.