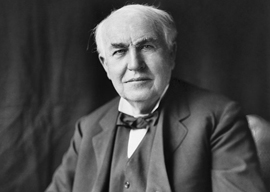 Should white men be blamed or thanked for inventing most of the technology that makes our lives better?

A new study by Stanford economist Raj Chetty exploiting his unique access to your old 1040 tax returns argues that the massive gaps in inventiveness (as measured by patents) seen among the races, the sexes, and the regions of the country represent a tragic case of what he calls “Lost Einsteins: The Innovations We’re Missing”:

Whites are more than three times as likely to become inventors as blacks. And 82% of 40-year-old inventors today are men.

Chetty says, based on his study of 452 patent holders who were New York City public school students and for whom he has third-grade test scores:

High-scoring black kids and Hispanic kids go into innovation at incredibly low rates…. There must be many “lost Einsteins” in those groups—children who appear to have been similarly able at a young age to their white and Asian peers but who never got a chance to deploy their skills.

A lack of exposure to innovation can help explain why high-ability children in low-income families, minorities, and women are significantly less likely to become inventors. Importantly, such lack of exposure screens out not just marginal inventors but the “Einsteins” who produce innovations that have the greatest impacts on society.

By the way, it’s unclear why Chetty’s study of inventors is entitled “Lost Einsteins” rather than “Lost Edisons.” Chetty, who sometimes seems not all that familiar with his adoptive country, appears to have gotten the European scientific theorist Albert Einstein (who, although he once worked in a patent office, was not much of an inventor) confused with the American inventor Thomas Alva Edison (whose name is on 1,093 U.S. patents).

Einstein, Edison…they both begin with “E.”

In particular, targeting exposure programs to women, minorities, and children from low-income families who excel in math and science at early ages (e.g., as measured by performance on standardized tests) is likely to maximize their impacts on innovation.

The Indian immigrant doesn’t seem all that aware that encouraging blacks (and, to a slightly lesser extent, Hispanics) as well as girls to study science and engineering has been an enormous social priority for the past half century.

“As usual, Chetty has assembled some extraordinary data, which makes the obtuseness of his explanations more frustrating.”

For example, try going to Google right now and searching for “American inventors.” The top ten results will be Edison, Alexander Graham Bell, and eight blacks. This is likely the result of schoolteachers assigning countless reports on “African-American inventors.”

Nor is it obvious that going into science and engineering is a good career strategy for the small numbers of blacks and Latinos with excellent math skills. Neither field is particularly well paid at present due to the immense competition from Asian immigrants. A better strategy for affirmative-action-eligible blacks and Hispanics is the M.B.A. route to Wall Street, the highest-paying sector, or to corporate America.

Indeed, Chetty’s own evidence suggests that a more effective strategy for boosting the innovativeness of our economy is for Americans to work harder to find overlooked young Edisons who aren’t all that different from the original Edison: white males from between the coasts.

As usual, Chetty has assembled some extraordinary data, which makes the obtuseness of his explanations more frustrating.

As I explained in my 2015 Taki’s column “Moneyball for Real Estate,” Chetty somehow talked the IRS into letting him have the data from hundreds of millions of tax returns. (He swears the data are anonymized so that he and his no doubt extremely clever assistants can’t possibly figure out exactly how much money you or Donald Trump or Bill Gates or Elizabeth Warren made in 1996.) He knows the adjusted gross incomes for millions of both parents and their children, which is close to a holy grail of social science.

Now Chetty has linked the income figures with 1.2 million names on patent filings. In the case of 35,000 young inventors, he even knows their parents’ incomes.

Patents aren’t a perfect measure of innovativeness, but they are a lot better than nothing.

He finds that having a parent who holds a patent makes a child about nine times more likely to earn a patent than having parents who didn’t earn patents.

Children whose parents were in the top 1 percent of income are about ten times more likely to hold patents than kids whose parents were in the bottom half of the income distribution. On the other hand, because there are fifty times more people in the bottom 50 percent than in the top 1 percent, kids from the lower half still earn five times as many patents in total as kids from the 1 percent.

My feeling is that nature and nurture both play a role in equipping offspring to make major contributions to humanity, and we should be appreciative of the kind of families who prepare their kids well. But Chetty, in contrast, seems to find something slightly sinister in that some kids get the kind of genes and upbringings that help them make important inventions while other kids don’t.

In contrast to Chetty’s large national sample of patents by parents’ income, Chetty’s race figures for patents apply only to his sample of 452 former New York City public school students, so they are only dubiously applicable to the whole country.

Can we trust those numbers? I suspect that the impressive performance by NYC public school blacks in being 30 percent as productive at earning patents as NYC public school whites is a major fluke. The national white-black gap is undoubtedly much larger than that.

Chetty’s implausible results must be caused either by his small sample size or by the oddities of New York City, where the most ambitious white parents are comically frantic to get their 4-year-olds admitted to $40,000-per-year prestige private kindergartens rather than deign to send them to public school. Or possibly New York City has quite a few high-performing blacks due to middle-class immigration from the West Indies and Africa and the remnants of the American-born Harlem Renaissance of the 1920s.

Or perhaps there is something wrong with the test NYC gives in the third grade because blacks and Hispanics notoriously don’t score well at all on the high-stakes test given in eighth grade that determines entry to New York’s eight high schools. For example, Stuyvesant HS is 72.4 percent Asian, 17.9 percent white, 2.7 percent Hispanic, and 0.7 percent black.

In contrast to Chetty’s finding that blacks make up 17.3 percent and Hispanics 8.4 percent of inventors, a 2016 study by the Information Technology Innovation Foundation, “The Demographics of Innovation in the United States,” of 923 leading innovators in the U.S., both American and foreign-born, reported:

White innovators accounted for 75.6 percent of the sample. Individuals of Asian or Pacific Islander ethnicity made up the second largest group at 18.7 percent. Of the remainder, 3.3 percent were Hispanic; 0.4 percent were Black or African American…

Interestingly, most of the nonwhites in the ITIF study were immigrants:

For example, 91.4 percent of Asian innovators were born outside the United States. Similarly, more than half of the Hispanic population represents immigrants from South and Central America. Four out of six respondents identifying as Black (out of the total respondent pool of 923) were immigrants from Africa.

The ITIF sample by race is more than twice the size of Chetty’s NYC sample by race, and it strikes me as much more plausible than Chetty’s assertion that blacks and Hispanics represent over one-fourth of inventors.

That blacks and Latinos don’t innovate much either in other parts of the world suggests that they’d be a poor bet to innovate here if only we could relocate them to the Magic Dirt.

On the other hand, as I’ve suggested before, the relatively poor performance of African-Americans compared with blacks from abroad at fields outside of sports and entertainment implies that there is something wrong with African-American culture that is holding American blacks back from performing as well as, say, educated Barbadians or Ghanaians.

Chetty also argues that geography plays a role in innovation. He salutes Modesto in California’s Central Valley for having by far the highest percentage of women among patent holders.

Once again, this is probably a fluke. Modesto is an unlikely feminist utopia. It last impinged on the national consciousness in George Lucas’s 1973 movie American Graffiti. Surely the real reason Modesto has a high percentage of inventors who are female is because it has a low number of inventors who are male. Overall, Modesto has the sixth-fewest inventors growing up there of any metropolitan area in the country.

This is probably due to a long pattern of Modesto being brain-drained by the nearby San Francisco Bay area. For instance, Lucas, an innovative individual, got out of Modesto and has spent most of his life in Marin County north of the Golden Gate Bridge. It’s unlikely that his children will ever make their homes in modest Modesto.

Chetty’s list of best hometowns for innovators overall is more plausible than his list just for women. Topping the chart is the San Jose “commuting zone,” which includes Stanford and Silicon Valley. (I outlined the favorable combination of nature and nurture found in Cupertino, Calif., in my 2011 review of Walter Isaacson’s Steve Jobs.)

The second-best place for a would-be inventor to be raised is Madison, Wis., home of the U. of Wisconsin.

What science-fiction novelist Neal Stephenson calls Midwestern American College Towns do well in Chetty’s rankings of where to grow up, supporting Stephenson’s claim that they are essential to understanding the proud history of American technology.

Similarly, Tom Wolfe’s epic 1983 article on the roots of Silicon Valley, “The Tinkerings of Robert Noyce,” pointed out that a huge fraction of Silicon Valley founders tended to be Protestant Midwesterners. For example, Noyce of Intel was the son of the Congregationalist chaplain of Grinnell College in Iowa.