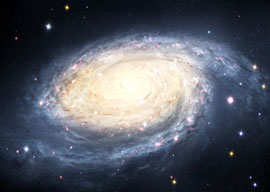 The world is too much with us, late and soon. Before long, it can begin to seem reasonable. I have my doubts. The usual always seems reasonable.

For example, existence seems reasonable. We wake up every morning and there it is. Actually, it isn”t reasonable. It’s just customary. We avoid thinking about this so as not to become anxious. Or so, anyway, think I.

The sun, we are told”and I have no reason to doubt it”is a roaring ball of hydrogen fire in apparently infinite darkness, an inexplicable void, endlessly lonely, frigid, meaningless, speckled with outposts of violent nuclear fusion. That’s reasonable? We hear of this on droning nature shows and say, “Yes, interesting, but what is on the movie channel?”

As we watch Lucy reruns we ride around the central conflagration on a small ball of mud and rock, which we call a planet, and see nothing curious in this. It is very curious.

“Astronomers tell us of the speed of light and the red shift and remote galaxies at millions of light years of distance and, confusing description for understanding, we feel that the mystery of things has been abated.”

Believing that the recurrent is reasonable probably keeps us from going mad. It is the principle underlying particle physics, as otherwise it would be impossible to believe that a thing can be a wave and a particle at the same time. If we thought too much about such matters, we would need massive amounts of Xanax to quell the anxiety. Alice in Wonderland is more plausible than this odd world in which, somehow, we find ourselves. So we check the movie channel.

Humanity has invented various ways to give itself a sense of understanding what it does not understand, thus maintaining inner tranquility. Today we favor the sciences for the purpose. Astronomers tell us of the speed of light and the red shift and remote galaxies at millions of light years of distance and, confusing description for understanding, we feel that the mystery of things has been abated. Why, it’s just physics. That’s all it is. Of course we won”t know the current state of a galaxy at a million light years for another million years, by which time it will no longer be the current state. For all we know, those stars may have turned into giant tube roses or ice cream cones. We have no way of knowing.

The sciences are fascinating, but they have a pedestrianizing and soporific effect. They make weirdness piled on improbability poured over the incomprehensible seem as ordinary as breakfast. How did the stars get there? Well, there was the Big Bang. We know because of the 4K background radiation. But … why the Big Bang? Well, you see, the question has no meaning within physics, so let’s talk about the state of the universe 10-45 seconds after the Bang, and then about the formation of electrons. All right, but why electrons? Why not cream cheese? Well, you see, it’s just the nature of Big Bangs.

It all works, or seems to, provided that you focus on the how and not the why. Given diffuse clouds of hydrogen, it can be shown mathematically (I do not know the mathematics of this, but will take it on faith) that gravitation will lead to coagulation and compression and rising temperatures and ignition and away we go. But why gravitation instead of repulsion? Why does this seem to make sense? Because we are used to it.

The philosophical principle of the sciences is that It Just Is. One planet does not attract another for a reason. It just does. There is nothing mysterious about T. Rex and those walking horrors of the Cretaceous. They just were, the inevitable result of physics and chemistry. What else could you expect? It’s a simple matter of starting conditions.

In fact there is nothing mysterious about anything. Everything Just Happens. That’s all.