Louis C.K. Beats Off the Mob 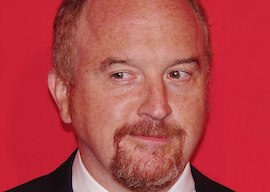 When I was growing up, my great passion was comedy. Monty Python, National Lampoon, George Carlin, etc. As a kid, I was obsessed with deconstructing humor. I’m not a laugh-out-loud kind of guy (except when I’m humoring a girl on a date). I’m more into appreciating jokes than laughing at them. More than any other person or program, SCTV, in its many various incarnations in the 1970s and early ’80s, was my mentor. To this day, there has never been a group of writers more adept at creating multilayered humor—humor that combines character-driven jokes, satire, and social commentary—than the creative forces behind the Second City TV shows. Parker and Stone of South Park come close, but SCTV remains the gold standard.

We all like to think that comedy can change the world, that satire can down a dictator or cure society’s ills. Bullshit. Comedy can’t even change comedy. You can mock every idiotic comedic trope in the world, and you can do it well, as SCTV did, but you can’t stop people from enjoying the low-hanging fruit, you can’t stop comedy writers from picking the low-hanging fruit, and you can’t stop each new generation from discovering for themselves the clichés of the past (in other words, as one generation tires of scenes in which guys get bopped on the head with a ball, along comes someone like Adam Sandler, and a whole new generation of viewers “discovers” what the previous one has tired of).

Yet, funny (or unfunny) enough, the self-righteous and the thin-skinned act like comedy is the most important force for good or evil in the world. On the left, we have the identity-driven “victim groups,” and nothing rankles them more than jokes. Tell a joke that gays don’t like? Tell a joke about a tranny? Mock black people? Congratulations, you’re now worse than Hitler. Twitter was quite literally built for the one-liner, the quip without context, the “brain droppings” (as Carlin used to say). And again and again these days we see people (the famous and the totally unknown) whose lives are destroyed over silly little Twitter quips.

Victim groups act as though somehow comedy has the power to genocide them. As a “Holocaust dude,” let me share this small truth—Hitler and Himmler did not accomplish what they did through the use of comedy. Neither did the KKK, neither did the Bolsheviks. But these days, you can be a member of the Westboro Baptist Church and you’ll get less flak than if you’re a comedian who uses the word “fag” or “tranny” in a bit.

“Comedy just doesn’t have the import that people like to assign it. Comedy has one true power—to make you laugh.”

On the right? Look at Trump’s idiotic overreaction to the boringly uninspired and repetitive Alec Baldwin sketches on SNL. The man acts as though Baldwin’s mugging could bring down his administration. Yeah, the same way all the George W. Bush ridicule led to his defeat in 2004. Oh, wait. He was fine.

Comedy just doesn’t have the import that people like to assign it. Comedy has one true power—to make you laugh. And the more politicized we’ve made not just comedy but the discussion of comedy (are there any remaining comedians or once-popular sitcoms that have yet to be the subject of a Buzzfeed or HuffPo essay about how they’re now considered “problematic”?), the further away we’ve drifted from the reality that comedy always just comes down to: Did that shit make you laugh? Did it make someone laugh? If so, it’s good comedy. End of debate. As any stand-up knows, the laughs mean a piece worked, and if a piece worked, you’ve done your job.

Today we’re besieged by people who want to chain comedy to a “greater good,” who purposely want to subjugate the age-old principle of “Did it get a laugh?” to the question of “But does it help ‘the cause’?” (whatever that “cause” might be). That’s why I’m willing to go out on a limb and suggest that disgraced comedian Louis C.K.’s recently leaked “comeback” show at Governor’s Comedy Club in New York is the most important event in comedy of the past twenty years.

C.K., as I’m sure you’ll recall, was the phenomenally successful comedian whose life imploded at the height of the #MeToo campaign, when longtime rumors of his public wanking in front of female colleagues were finally confirmed by the man himself after the formerly deaf and dumb press decided to actually examine the allegations. For whatever reason, C.K. likes to whack it in front of women. Public masturbation is nothing new. Salvador Dalí was legendary for jiggling his dirlywanger in front of models and guests, and Diogenes made a cottage industry out of spanking his spanakopita in the marketplace (according to legend, when challenged on his public pud-thumping, the famed “cynic” replied, “If only it were so easy to soothe hunger by rubbing an empty belly.” That’s some good old-fashioned ancient Greek logic right there).

I’ve always marveled at what a skilled joke-teller Louis C.K. is. He’s prone to excess, but in terms of the ability to weave a seamless, satisfying riff, he’s one of the best. Still, I genuinely couldn’t see a path back for him. Anyone who even hinted that maybe he should be given a chance to return from exile was swiftly clubbed into silence (this includes extreme leftist comedian Michael Ian Black, and the best comic mind in America today, Norm Macdonald, who was forced to grovel before the harpies on The View after suggesting that C.K. and Roseanne Barr had suffered enough punishment). But more to the point, I couldn’t see how he could be funny again, as he’d now become the butt of jokes. There’s no dignity in public wanking. It’s laughable and gross. Odd as it sounds, comics need to be taken seriously, and C.K. was now a punchline, rather than a teller of punchlines.

How does a comedian come back from that? Well, he could construct a self-referential set in which he uses humor to address and apologize for his lewd behavior. Or he could cozy up to the #MeToo community by becoming a “Men are pigs, here are twenty jokes about how women are great and men suck” type of comic.

Or, he could do exactly what he did in the 49-minute set that was leaked online: He could say, “Fuck it, I’m just gonna do a bunch of jokes and ignore the wanking entirely.”

Mind you, not that there wasn’t a self-referential aspect to the act. One segment dealt with the repercussions he suffered from his public shaming. But the reasons for the shaming remained unspoken, and the jokes seemed calculated to be as offensive to the #MeToo mavens as humanly possible. And the ideologues responded as expected. Leftists went after him even harder than they did after his admission of misconduct in 2017, and rightists applauded the fact that his jokes targeted trannies, minorities, and the smug, snot-nosed Parkland “survivors.” Both responses were Pavlovian. And while I also loved hearing a comedian take on the untouchable Saints of Parkland, I think there’s something a lot more important, and more meaningful, about that comeback set. And it really has nothing to do with left or right, but with comedy as a whole.

Comedy is slowly but swiftly being destroyed by an ugly mob made up of amateur Twitter “investigators” (by age 22 I was scraping cyanide residue samples from walls at Auschwitz-Birkenau, so please forgive me if I don’t consider scrolling down a Twitter feed to be actual “investigative journalism”) and ideological extremists on the left and right. On the left, we have the usual suspects—feminists, LGBTs, and race-obsessed “people of color”—and on the right we have “Pizzagate” nuts like Mike Cernovich and Jack Posobiec who take every off-color joke as proof of a hidden Hollywood pedophilia cult, and mainstream conservatives like Kurt Schlichter who cheer the destruction of people like James Gunn because if we keep taking the “scalps” of leftists, they’ll stop taking ours (no offense, colonel, and thank you for your service, but that’s a fucking doltish notion).

More and more, anyone who tries to be funny online, or who dared try to be funny years ago, is brought down by one or all of these lynch-happy goons.

Someone has to stand up to the mob. Someone has to say, “You know what? I’m just going to go on being funny like nothing happened.” No Norm Macdonald-style groveling, no Tracy Morgan/Kevin Hart/Amy Schumer-style apologizing for jokes, no Sarah Silverman-style denouncing of old material. We need someone to say, “I’m just going to go on stage and do what I’ve always done—try to make a roomful of people laugh. And if I succeed, that’s all that matters.”

Louis C.K.’s comeback show was a groin-kick to the mob, and a courageous reassertion of the formerly important comedic principle that it’s the laughs that matter. And his set got the laughs, which is why the mob is so enraged at the moment. Because it’s possible that he’s set a precedent. Maybe the next comedian who’s accused of a far lesser offense than public jacking, maybe the next comic attacked for old tweets or poor-taste jokes, will think twice before capitulating. If Louis C.K. can come back, anyone can.

This is the mob’s greatest fear: the loss of the power to kill careers. And for those of us who treasure comedy, it represents a new hope.

Yeah, Louis C.K. is kind of a perv. But he’s not nearly as dangerous, or as frightening, as the anti-speech hooligans. In a battle between C.K. and the online censors, inquisitors, and lynchers, I’m on Louis’ side, one hundred percent.

Whether he knows it or not, he’s battling for something a lot bigger than himself. And for those of us who treasure comedy, it’s a battle worth fighting.