Love is Now a Hate Crime 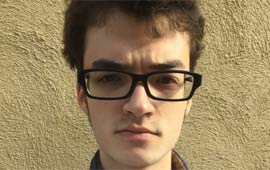 On December 9 at about 4AM, a student at Columbia University filmed another student committing the unpardonable sin of declaring that he loves being white. The video lasts less than a minute as a clearly intoxicated and upset scrawny white boy flails about while screaming:

The reaction to this “racist incident” proves that we have reached Peak Doublethink. It mattered not a whit that the idea white men invented the modern world is true, because as you should know by now, truth is no defense against allegations of hate.

The white-lovin’ student in question is sophomore Julian von Abele, a physics major who has already published books called Physics Reforged and Time and the Multiverse.

Abele faced the predictable hyper-moralistic scorn but did not buckle.

“Anti-racist activist” Tim Wise, who actively displays racist hatred toward white people and is famous for wishing that old white people’s hearts would stop beating, called on his cohorts to “wreck” Abele:

Time to wreck this little shit. The irony of his rant is that once we make his ass famous for this, he will never accomplish anything, his white male-ness notwithstanding…Columbia should expel him. His future should be bleak…Good luck Chip…

As he did with the “hearts stop beating” blog entry, Wise deleted this tweet after his genocidal anti-white glee became too obvious for him to continue posing as a man motivated by racial tolerance. He then struggled to convince people that urging people to “wreck” Abele was in no way intended to encourage them to harass Abele and it was ridiculous that he’d even have to spell it out for all you white-supremacist mouth-breathers.

“Truth is no defense against allegations of hate.”

Throwing reality to the wind, NBC News wrote that the video showed Abele “berating a group.” In truth, Abele didn’t insult anyone. In fact, one woman put her hands on his face during his spiel, which technically constitutes assault. Another gives him the middle finger. Another calls him a “degenerate.” Another screams in his ear. Throughout the video, they consistently mock him.

But to the mainstream press, Abele was the harasser and insulter. They appear to believe that a man was harassing a mob, rather than what you see on the tape, which is a mob harassing a man and the man responding. Again—we’ve reached Peak Doublethink. It’s to the point where whenever they say anything, you should probably assume the polar opposite is true.

Columbia’s numerous black and Latino students’ unions—I didn’t hear anything about a white students’ union, likely because one doesn’t exist in this white supremacist society, which is really weird when you try to process it—talked about feeling threatened and unsafe. In truth, though, Abele threatened no one. Instead, he claims he has been repeatedly threatened since the incident.

That’s all well and good, white boy, but if you didn’t want to be threatened, you shouldn’t have made people worry about feeling threatened by, er, saying that you loved your race.

Columbia University’s student newspaper repeated the lie that a lone scrawny man “harassed” a mob—seriously, when does that ever happen?—and cited a quote by University Senator Alfredo Dominguez that may win this year’s award for Supreme Unawareness:

You can have arguments all you want about free speech and people being entitled to say what they want….But when that bubbles [into] assaulting black or brown people with that and then stalking them … you’re getting into levels of hate crime and your speech being directly related to violence…There needs to be more dialogue.

Meanwhile, back in the real world…

1) The only person who was technically assaulted in the legal sense was Abele when the woman put her hands on his face.

2) The only person being “stalked” is Abele, who is now the target of a coordinated campaign to destroy his life.

3) “There needs to be more dialogue”? The fact that this incident is even a news story is proof that egalitarian dogma is incapable of tolerating dialogue, attempts to enforce their monologue on everyone, and will “wreck” anyone bold enough to so much as attempt starting a dialogue.

Against this backdrop, it is also important to restate in the strongest terms Columbia’s deep commitment to a community and a living and learning environment free from discrimination and harassment based on race, ethnicity, religion, sex, gender and other aspects of identity.

That sounds nice, but where did Abele harass anyone based on race? According to Abele, the near-riot began when he chanced upon a group of students saying that Trump and his supporters encourage sexual violence:

I explained that I am a Trump supporter and I do not in any way encourage violence, sexual or otherwise….A large group of students gathered around me and told me that I had no right to share my views on women as I’m a white male with ‘white privilege.’ I was offended for being held personally responsible for the historical actions of people with the same skin color as me, and I was tired of the divisive rhetoric that blames all the ills of society on white men.

Ah, OK. So the first person or persons to mention race—and to demean someone based on their race—was whomever allegedly told Abele to shut the hell up because he’s a white male. So exactly nothing happened as it was reported.

Fiercely impenitent, the skinny-yet-scrappy physics student opened a Twitter account and demonstrated that he was not willing to concede an inch:

I feel like Western civilization is the greatest thing that has happened to this species, and that its basic principles, and the very identity of the West, is under attack in the Academy, the Media, and cosmopolitan American culture.

And although his enemies will not believe them because part of their entire world view consists of dictating what is in their opponents’ heads before they blow out their opponents’ brains, Abele insisted that he was motivated by love rather than hate:

I believe that every single person should love themselves and love their culture, and we should all be allowed to be proud of our heritage. As such, I would like to have my views be fairly considered in the public discourse, and not dismissed solely due to my race and gender.

So it’s official: If you don’t hate yourself for being white, you are guilty of a hate crime.