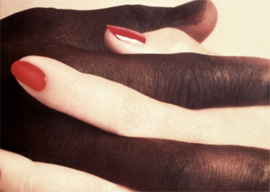 Has the gender gap in interracial relationships changed over the decades?

As an urbanite in the 1980s and 1990s in LA and Chicago, it was hard not to notice trends among interracial couples. Black/white couples typically featured a black man with a white woman. But among white/East Asian pairs, I saw far more white men than white women.

This gender gap struck me as interesting, yet seemingly nobody had written about it. Most writers on interracial sexual attraction prefer to moralize rather than scrutinize the statistics. So while enduring chemotherapy in 1997, I puttered for a couple of hours per day on an essay I titled “Is Love Colorblind?“ Assuming this might be the last article I”d ever write, I tried to make it good.

Data on interracial marriages from the 1990 Census confirmed the obvious. In 1990, black-husband/white-wife couples (such as O. J. and Nicole Simpson) were 2.5x as numerous as white-husband/black-wife couples (e.g., David Bowie and Iman). In contrast, white-husband/Asian-wife marriages (e.g., Woody Allen and Soon-Yi Previn) were a mirror image 2.5x as common as Asian-husband/white-wife combinations (such as Bruce Lee and Linda Emery).

“Most writers on interracial sexual attraction prefer to moralize rather than scrutinize the statistics.”

The chief reason for this struck me as “differences in perceived sexual attractiveness””that on average, blacks were seen as more masculine than East Asians. This pattern can be seen in the two interracial marriages of Obama’s mother. While losing interest in her good-provider Indonesian second husband, she still carried a torch for the Kenyan first husband who had run off on her.

Fifteen years later, the cancer is gone (knock on wood), but I don”t get out as much as I used to. Therefore, I was pleased to see a new Pew Research Center report, The Rise of Intermarriage, quantifying interracial newlyweds in 2010. Today, when NBA player Jeremy Lin is relentlessly praised for “shattering stereotypes,” have these statistical disparities persisted?

Much has changed, though. Except among college graduates, marriage is in decline. Of all babies born to women under thirty, 53 percent are now illegitimate. People who bother getting married these days tend to be more upscale than in the past.