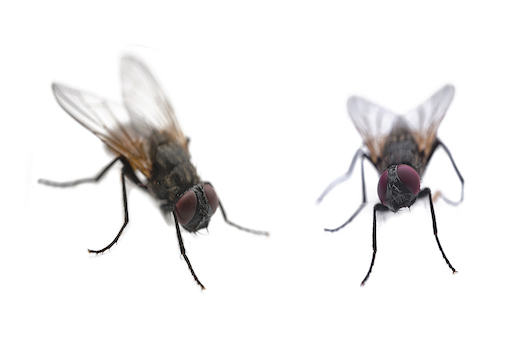 For the last few nights, before I go to sleep and when I wake up, I have watched the flies on the ceiling of my bedroom. There are about six or seven of them; there used to be far more, hundreds in fact, which I used to remove twice a day by means of a vacuum cleaner. I am ashamed to say that I enjoyed this process greatly. “As flies to wanton boys/Are we to the gods,” Shakespeare put it; and the wanton boy is never far below the surface of the adult man.

We noticed, my wife and I, that the flies emerged from and returned to a small but long enclosure that ran along the wall that enclosed an electric wire. The flies took advantage of a slight gap between the enclosure and the wall to make the between space their home. My wife, exasperated by them, sealed off the gap with plaster, in effect burying practically all of them alive.

Evidently the six or seven flies that I observe evening and morning are seeking entry into their erstwhile home. They must have been out foraging, or whatever flies do, when their home was sealed off. My wife said they looked bewildered as they sought entry into what had once been their home; they were looking for their friends, she said.

“When we watch an amoeba under a microscope, we endow it with intentions.”

How easily we project our emotions onto all animate beings! We infuse the animate world with meaning, or at least project meaning onto it. Descartes thought that all animals except Man were automata, in effect mere mechanisms, and that only Man was possessed of self-consciousness, but (apart from being wrong) few of us can think of animals, even the lowest of them, in this way. When we watch an amoeba under a microscope, we endow it with intentions, for example that it wants to escape something noxious in its surroundings or is hungry and wants to nourish itself.

The flies that infest my house in the country during the winter are known, so a kind correspondent once informed me, as cluster flies, of whose existence, in my biological ignorance, I had previously been unaware. In the winter, these flies seek out warm habitations such as houses in which to shelter from the cold; but in the spring and summer, they live outdoors and lay their eggs, parasitizing earthworms to do so. I can’t help but feel a little morally outraged by this, for are not earthworms the creators of soil upon which our food grows? (George Orwell said in the 1930s that our civilization was based upon coal, and therefore upon coal miners, but it would be more accurate to say that it was based upon earthworms, without whom we would starve.) Thus cluster flies are the enemy of civilization and are rightfully to be extirpated. We must protect our earthworms.

There is a curious thing about flies: In the mass they revolt us, and there is no doubt that they sometimes have revolting habits. Their larvae, maggots, likewise disgust us. (Is disgust with maggots universal in humanity, and if it is not, how do we learn it? If, on the other hand, it is universal, what evolutionary process accounts for it?) But a fly when viewed as an individual is capable not only of exciting our wonder at its marvelous biological contrivances, but also of being beautiful. Certainly, there are flies of metallic sheen that would do honor to the most expensive of sports cars.

Why is it that we can appreciate a fly as an individual but not in the mass? Some, of course, would say that the same goes for human beings. Shakespeare loved individuals (without that love, he could not have had such insight into them), but he despised mobs. We suspect anyone who claims to love humanity of being coldhearted with regard to individuals, of using his proclaimed abstract love for humanity to conceal his lack of the more concrete variety, which is always, or almost always, of individuals. It is true that there are some exceptional individuals who seem able to love Man in the mass, but they are far fewer than those who are capable of hating everyone.

Of course, there is a great difference between appreciating a fly and a human as an individual. If we were to examine a human with the closeness that is necessary to appreciate the beauty of a fly, we should probably end up being like Lemuel Gulliver, revolted by his microscopic vision of his Brobdingnagians. Swift seemed to find human beings repellent whether viewed close up or from a distance, that is to say individually or on the mass, but I think that his disgust was a defense against his disappointed love. Cynicism is often a defense against disappointed benevolence.

There are some creatures to which we cannot ever feel even the admiration that it is possible to feel for individual flies. Who can love or admire a slug, for example? But even here one must be prepared to admit of exceptions. I have a splendidly illustrated guide to the slugs of Europe, whose variety surprised me when I bought it, and (if the book is to be believed) there are those among us, a small coterie no doubt, who wish to preserve and collect slugs, as others collect butterflies. The book informs them how best to do it.

Most people, of course, are much more desirous of destroying slugs than of preserving them, for they are garden pests without, so far as we can tell, any redeeming features except as food for the birds. But we want to encourage birds, which are in decline in so many places of human habitation, in no small part because of the cats we love. The world is a complex place.

I look up at my flies from my bed and think, “Poor flies! It’s not their fault that they are flies. It’s not as if they could have chosen to be something else but have perversely, out of false pride, chosen to remain flies.” This, roughly speaking, is increasingly the attitude of sociologists and others toward criminals, etc. Poor criminals, it’s not really their fault (except if they come from backgrounds that we disapprove of)! There are a lot of lessons to be derived from the study of flies.